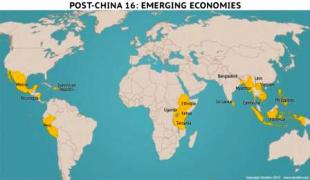 The economic slowdown in China has opened doors for 16 countries to lead the global manufacturing industry, according to a recent report.
The downturn and change in China’s economy indicates the country is on the verge of having a ‘low wages and high growth’ phase, and this would lead to Post China 16 (PC16) which includes 16 countries that will succeed in global manufacturing especially in the apparel sector, according to a report released by US geopolitical weekly, Stratfor Global Intelligence.
‘The PC16: Identifying China’s Successors’ report by Stratfor outlines in Latin America: Dominican Republic, Mexico, Nicaragua and Peru; in the Indian Ocean Basin: Ethiopia, Kenya, Tanzania, Uganda, Bangladesh, Sri Lanka, Indonesia and Myanmar; and in the periphery of the South China Sea: Cambodia, Laos, Philippines and Vietnam; as successors to China in garment manufacturing.
According to the report, garment manufacturing is a highly competitive area which demands low wages but provides work opportunities to large population.
The 16 nations are places that are at the beginning of their development cycle and the garment sector is growing in these countries.
The report states that PC16 is not a forecast but rather a list of countries where significant movements of stage industries, particularly apparel sector, could take place.
The PC16 represents countries which could be successors to China as they are low wage, underdeveloped nations with opportunities to grow their manufacturing sectors dramatically.