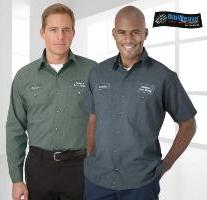 During the first half of the 20th century, through the 1950s, workers had virtually no choice when it came to the fabrics used in their uniforms. It was cotton or nothing. And while cotton was generally considered comfortable, it was not very durable; wrinkled easily, soiled quickly, and dried slowly when wet.

But things began to change during the "rebellious" 1960s, when consumers demanded more comfort from their personal clothing. That decade would mark the beginning of an ongoing commercial revolution in fabrics—many of which would weave their way into the uniforms worn by workers everywhere.

Consumer demand for improved fabrics during "The Sixties" dovetailed with research efforts made during previous decades, when chemists experimented with plant cellulous, petrochemicals, and even specialized alcohols to synthesize filaments in test tubes. It was hoped that resulting new fibers could create fabrics to rival cotton for softness, and outperform it with respect to breathability (comfort) and durability.

These early research efforts set the stage for a shift away from workwear made of 100 percent cotton. "If there was a period in the textile services industry we could point to as the turning point for fabric choices it would be the 1960s," says Adam Soreff, Director of Marketing at UniFirst, a leading provider of uniforms and workwear to businesses throughout the U.S. and Canada. "That's when the uniform supply industry moved toward adopting man-made fibers for fabrics to improve overall comfort and functionality in work shirts and pants."

Two of the first artificial fibers to emerge for commercial textile use were Rayon and nylon, which were made from plant cellulose and petrochemicals, respectively. Both were touted for their strength and abrasion resistance, which made them attractive to workers in high soil industries. "Cotton was still king," Soreff says, "but this was when uniform providers began incorporating nylon outerwear, specifically jackets and pants, into their offerings."

During the 1970s, as workers became increasingly accustomed to synthetic clothing, they demanded even more comfort in work shirts and pants. As a result, apparel manufacturers responded with a new "miracle fabric" called polyester.

Polyester fabric is made from petroleum-based products and had actually been available since the 1940s. But, it was now becoming widely embraced by clothing manufacturers to provide customers with apparel that was not only comfortable and durable, but had revolutionary "wash and wear" characteristics and "wrinkle-free" convenience. Polyester fashions would become omnipresent during the 1970s (particularly on the "disco era" dance floors).