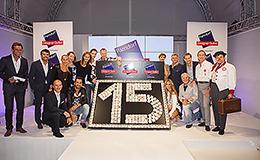 This year's event was made even more spectacular as the centre is celebrating its 15th anniversary.

Shoppers looked forward to an action-packed party night: all the stores at the centre kept their doors open until 11pm, with incredible special offers, including savings of up to 80%, while the first-rate entertainment line-up featured German actress Cosma Shiva Hagen, daughter of Nina Hagen, as well as a host of Austrian VIPs and Florian Luger, Austrian newcomer model for Louis Vuitton and Armani.

The Late Night Shopping event at Designer Outlet Parndorf is a red-letter day for countless fashion aficionados, both nationally and internationally. The event is expected to be particularly popular among Russian tourists, the highest tax-free spending nationality at the centre, followed by the Chinese, Koreans and the Ukrainians.

In the first six months of 2013, spending by Russian fashion lovers rose 68% at the centre, compared with the same period the previous year, while spending by Ukrainian shoppers nearly doubled!

Designer Outlet Parndorf, 30 minutes from Vienna, on the A4 motorway, opened in 1998

with 40 stores, and it is now the biggest designer outlet in the whole of Central Europe and a shoppers' paradise, with 170 stores brimming with brands such as Burberry, Hugo Boss, Armani, Gucci, Michael Kors, Furla, Escada, Calvin Klein, Baldinini, Guess, and many more, available with year-round savings of 30-70%, with a special anniversary offer of up to 80% off recommended retail prices.