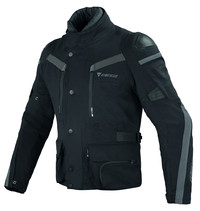 The special event took place ahead of the 12th round of MotoGP, Moto2 and Moto3 at Silverstone this weekend, where Esparagaró, Hayden and Salom will continue their respective season assaults.

Three new gloves were introduced, namely the winter-warm Scout Evo GTX, the classically styled Essential and the Veloce sports glove, as well as three new boots – the Lince GTX for touring, a casual sneaker-inspired Street Biker D-WP and the racing-styled TR-Course Out. There were also two new jeans, the D1 1K and the D1 1K Pred, as well as some updates made to the Manis back protector.

More new products will be released from the collection later in the year.

Alongside the new products Dainese presented its D-air systems. Both launched on the market over the last two years the systems are designed to protect riders on track (D-air Racing) and on the road (D-air Street).

D-air Racing is a wireless system built into a Dainese one-piece leather suit that detects a fall or slide immediately and sends a trigger signal to activate the airbag.

Not just an airbag, the system also features data acquisition software developed by German company 2D (2d-datarecording), which supplies some of the top teams in MotoGP and F1. The software gives D-air wearers an effective tool to monitor riding performance and record telemetry data, which can be downloaded and displayed on a computer.

The D-air Street is vastly different; the airbag and deployment facilities are fitted in the jacket and the mechanics of the whole system are fitted to the motorcycle. D-air Street features a fall sensor that is physically connected to a display unit on the bikes dash. This shows the rider system information, including when the device is connected, the battery life and information about the pillion’s system, if they are wearing one.

Both D-air systems are available from supported D-air Dainese dealers, while the new collection will start to be available in UK dealers from mid-October.