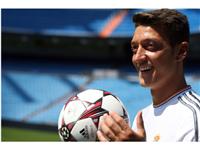 Adidas launched a new campaign in Madrid together with Mesut Özil in order to welcome the world-class football player to the adidas family.

The campaign entitled "Welcoming Mesut to the family" shows the international player in a commercial with football greats such as Bastian Schweinsteiger, Kaka, Philipp Lahm, Manuel Neuer, Zinedine Zidane, Thomas Müller and Marcelo – all of them adidas players who are seen in the clip giving Mesut Özil a friendly welcome to the family.

The campaign, which was developed by the Berlin-based advertising agency dieckertschmidt, will be launched immediately, predominantly via digital media and primarily through the adidas social media channels, such as Facebook and YouTube. Numerous adidas athletes will also add the slogan "Mesut is my brother" to their Facebook profiles.

Mesut Özil said: "I am proud to be part of the adidas family and I immediately felt at ease in my talks with adidas managers. adidas is the number one brand and has a unique history in football. I already wear adidas jerseys when playing for the German national team and for Real Madrid – so this partnership really cements our relationship."

Herbert Hainer, CEO of adidas AG, said: "We are happy that Mesut Özil has joined us. He is one of the outstanding personalities in German and international football and strengthens our portfolio of great players all over the world. With this partnership, we are once again highlighting our exceptional position as the number one brand in football."

Mesut Özil is not only one of the most extraordinary football players in the world, he is also a record holder when it comes to social media. He is the only German to have exceeded the 10 million mark on Facebook, with 10.8 million fans. His 2.8 million followers on Twitter also make Mesut Özil a strong international brand.

The 24-year-old had already signed a long-term contract with adidas in July covering joint advertising and PR activities. The midfield player will also bring his experience and knowledge to the development of football boots at adidas. In keeping with his style of play, Özil wears the latest model of the Predator football boot, giving him perfect ball control in every situation.