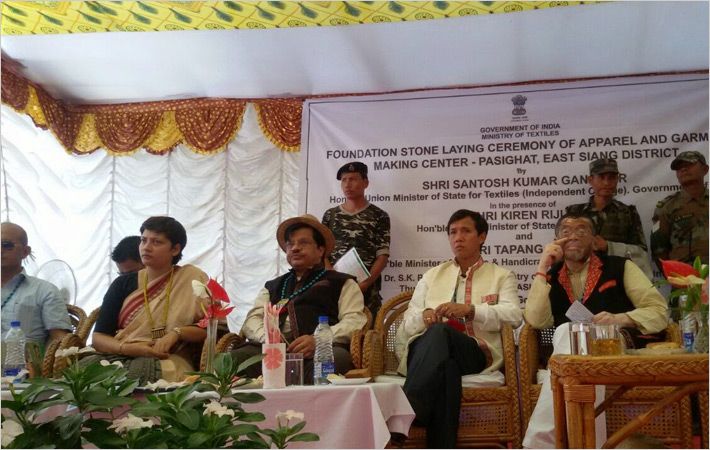 Courtesy: PIB
Arunachal Pradesh has become the fourth state in the Northeast where work has begun to set up an Apparel & Garment Making Centre after textiles minister Santosh Kumar Gangwar laid the foundation stone for the project in Pasighat on Thursday, according to an official statement.
The centre is being set up as part of a landmark initiative announced by Prime Minister Narendra Modi in Nagaland, on December 1, 2014. The Prime Minister had announced that an Apparel and Garment Making Centre would be established in all northeastern states. Each Apparel and Garment Making Centre is estimated to generate direct employment for 1,200 people.
Work on such a Centre for Nagaland has already begun. Gangwar had laid the foundation stone for it on February 24. He also laid the foundation stone for a similar centre in Manipur on March 24 and in Sikkim the following day.
Each state will have one centre with three units, each having 100 machines. For local entrepreneurs with requisite background, required facilities to start a unit will be provided in ‘plug and play’ mode. Once such entrepreneurs get established, they can set up their own units, allowing the facility to be provided to new entrepreneurs.
The initiative comes under the North East Region Textile Promotion Scheme (NERTPS) of the Ministry of Textiles. NERTPS is an umbrella scheme for the development of various segments of textiles such as silk, handlooms, handicrafts and apparels and garments. The scheme has a total outlay of Rs 1,038 crore in the 12th Five Year Plan.  (SH)