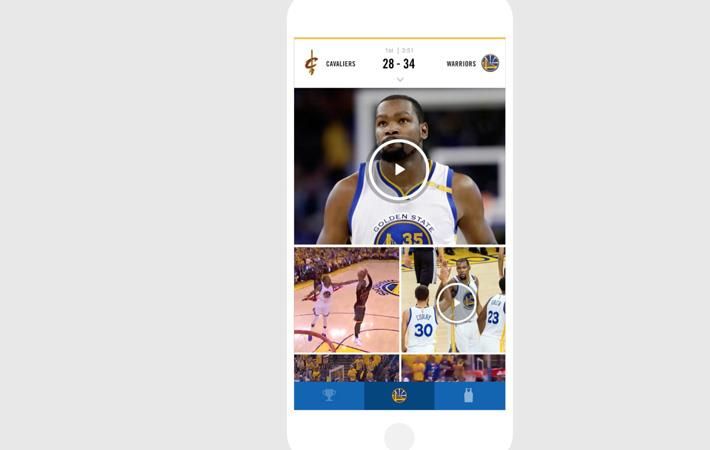 Marking a new fan experience, Nike and the NBA have brought new innovations: the Nike NBA Connected Jersey, the first NBA jersey that gives the wearer an all-access pass into the world of their favourite team and players; Statement Edition uniforms; and the Nike Therma Flex Showtime Warm-up Jacket, the first hooded jacket to be worn on court during gametime.

The official announcements took place at an event in Los Angeles attended by players from all 30 NBA teams.
Marking a new fan experience, Nike and the NBA have brought new innovations: the Nike NBA Connected Jersey, the first NBA jersey that gives the wearer an all-access pass into the world of their favourite team and players; Statement Edition uniforms; and the Nike Therma Flex Showtime Warm-up Jacket, the first hooded jacket to be worn on court during gametime.#

“When you think about basketball, you think of Nike and the NBA,” said Mark Parker, chairman, CEO and president of Nike. “After helping fuel the sport’s impact for years, we are thrilled to now be able to push the boundaries of what’s possible directly with the NBA. From modernising the look of the game to revolutionising how fans can be a part of it, we can’t wait for the season to start.”

“Our Nike uniforms set a new standard for connecting our most passionate fans with their favorite NBA teams and players,” said Adam Silver, NBA commissioner. “Nike has once again taken the game of basketball to a new level, this time with one of the most advanced jerseys in sports.”

Using new NikeConnect technology, each adult-sized Nike NBA Connected Jersey will have an embedded NFC (near field communication) chip that will launch real-time team and player content such as pregame arrival footage, highlight packages and top players’ favourite music playlists – all on the jersey owner’s mobile device. Throughout the season, a wealth of exclusive offers and experiences will bring fans closer to the game they love.

To unlock it all, fans will download the NikeConnect app and tap the jersey with their smartphone. These jerseys become available online globally on September 29, rewarding the game’s fans with a revolutionary experience that creates a new point of connection between fans and the game.

“In our new connected era, Nike will lead with products that build a relationship with our consumers,” said Trevor Edwards, president, Nike Brand. “With NikeConnect, we deliver to basketball fans everywhere the personal and premium experiences we know they love.”

Nike and the NBA also unveiled the third of four core team uniforms – the Statement Edition, inspired by teams’ desire to make a bold statement the moment they step on the court. Nike’s designers worked with the teams and the brand’s roster of athletes to create new and updated uniforms for this third edition.

The Statement Edition uniform follows the earlier unveiling of the Association and Icon Edition uniforms. As previously announced, the home teams will determine which uniforms to wear at their games. The fourth team edition will be released later this year.

In addition to the new uniforms, Nike and the NBA debuted the Nike Therma Flex Showtime Warm-up Jacket, the first on-court warm-up jacket with a performance hood. Celebrating the style of the game, Nike designers refreshed a beloved apparel staple into a new performance product for athletes on and off the court.

The jacket, created with new Nike Therma Flex fabric, helps athletes maintain the right body temperature during pregame warm-ups and downtime during a game – a critical element for peak performance. Developed with input from top NBA athletes, the reimagined hood allows for optimal vision, hearing and warmth, delivering a greater intersection between performance and style – a key request from NBA athletes.

The Nike NBA Connected Jersey is available exclusively online starting September 29, and the Nike NBA uniforms and Nike Therma Flex Showtime Warm-up Jacket will debut on court on September 30, the start of the NBA preseason. All Statement Edition jerseys will be available at retail on November 20, and will begin being worn on-court on November 25. (SV)