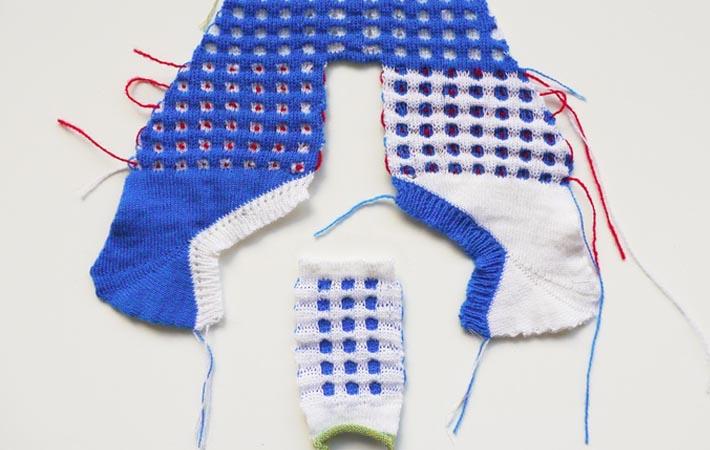 Courtesy: Kickstarter
A digital knitting machine, Kniterate, is all set to revolutionise fashion by giving brands an opportunity to go for personalised clothing in an affordable way. It uses yarn to 'print' digital clothing files and via an easy-to-use internet platform, users can design garments from scratch, edit templates or upload their own images and press 'knit'.
Kniterate has hundreds of needles that are computer controlled to create loops, which combined create knitwear. The needles move in mesmerising waves, back and forth, knitting fabrics into shapes. The products can be made ready to use, like scarves and beanies, or may require assembly, like a sweater.
Kniterate is the brainchild of Gerard Rubio, who four years ago started OpenKnit, an open-source knitting machine. In 2015 it was selected to be part of HAX, the first and largest hardware accelerator, in Shenzhen, China. After showing their HAX prototype in Maker Faire Bay they went on to partner with an industrial knitting machine manufacturer. Since then they have been working with London designers to create samples that show Kniterate's potential.
The machine's software is still in development. In the past year the team has built a basic prototype of the web-based app, which has been used to design certain patterns onto scarves and then knitting the file. More recently the team has been working on a more efficient script that is able to take images and convert them into knitted pieces.
Rubio said, "Until now the production of clothing has been in the hands of a few companies or skilled individuals. Kniterate was born to change that, and to democratise clothing manufacturing, allowing anyone to create high quality personalised garments and accessories."
The machine is expected to change the current supply chain model of the garment industry. At the moment retailers ship garments half across the world and end up with excess stock, which then they are forced to mark down, or even worse, throw away. With Kniterate clothing is made locally and on demand, and because it is made to shape there is no waste due to cutting fabrics.
Nat Hunter, strategic director of Machines Room, said, "Rather than someone having to make 20,000 jumpers in China, and then ship them over to sell them, you can make much smaller batches, and you can also make them local to where you are, preventing garments from ending up in landfill."
Personalised goods provide new revenue streams and create brand loyalty in a time of increasing buyer sophistication. This is because so far people had to conform to the standards of the fashion industry and mass-produced styles despite their different shapes and sizes. Kniterate provides a tool to make personalised goods more affordable for both the consumer and the maker. Therefore, Kniterate has a place in the workshops of independent designers, makerspaces, libraries and is also part of the in-store experience of retailers.
Kniterate has created an easy-to-use version of industrial knitting machines that can be installed in any workshop for a cost ten times lower than their industrial peers. It helps fashion designers avoid the long lead times of outsourcing testing and manufacturing of their designs. It also provides a tool for makers to experiment with new types of yarns and fabrics. It now becomes easy to experiment and build intricate knitted patterns with conductive yarns to create the new wave of wearables. (SV)