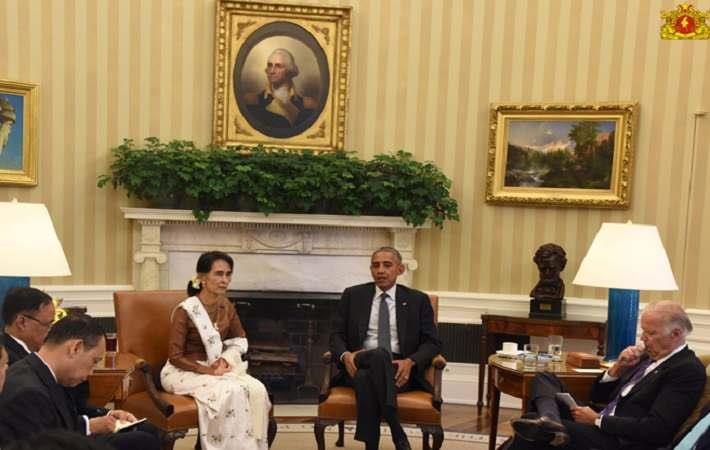 Myanmar state counsellor Aung San Suu Kyi with US president Barack Obama at White House. Courtesy: statecounsellor.gov.mm
US president Barack Obama has signed a proclamation reinstating Myanmar’s (formerly Burma) eligibility for benefits under the Generalized System of Preferences (GSP) programme as of November 13, 2016. Since Myanmar is a least developed country (LDC), it will be able to export approximately 5,000 products to the US duty-free under this programme.

The trade preference benefits were restored after the conclusion of a review of Myanmar’s compliance with the eligibility criteria under the GSP statute, including whether the country is taking steps to afford internationally-recognised worker rights.

“While there is more work to be done, including to address concerns regarding human trafficking, Burma has made important progress in recent years with respect to worker rights,” said United States Trade Representative (USTR) Michael Froman. “We see Burma’s democratically-elected government giving new hope to its people, making commitments to continue implementing reforms that strengthen workers’ voices, and working to combat forced and child labour. We have partnered with Burma to support many of these reforms in the past and will continue to do so with GSP in place.”

GSP benefits to Myanmar were suspended by the US in 1989 due to worker rights concerns. In 2013, the Myanmar government requested the US to restore the trade benefits. Subsequently, the Office of the United States Trade Representative led an extensive review of Myanmar’s compliance with all of the GSP eligibility criteria, and in particular of Myanmar’s recent record of labour reforms and strengthened worker protections.

Since the new democratic government took office in March 2016, senior Myanmarese government officials, led by Aung San Suu Kyi, and joined by Myanmarese business and labour leaders, have also engaged closely with the United States on labour issues to demonstrate their country’s eligibility under the statutory GSP criteria.

The benefits under the GSP programme will be reinstated effective on November 13, 2016, after a 60-day Congressional-notification period. As a United Nations-listed LDC, whose per capita income is at $1,280, the second-lowest in East and Southeast Asia, Myanmar will be able to export approximately 5,000 products to the United States duty-free.

“Regaining GSP trade benefits will spur economic development, generating opportunities for exports that create jobs and help reduce poverty in the formerly-closed economy,” the USTR said in a statement. (RKS)