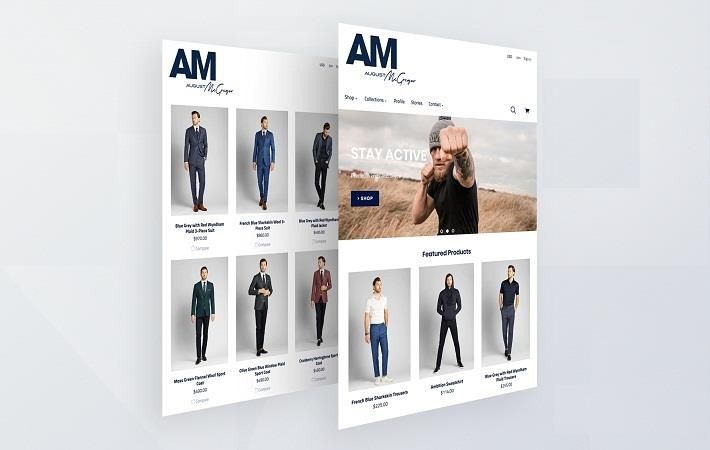 Launched at the end of 2018, the young August McGregor brand is building a reputation on par with the respect A-list tailor David August has earned from the fashion industry. According to its website, August McGregor fashion is made for men like Conor McGregor, who have an attitude of excellence about everything they do in life. When it came time to choose an online platform, the August McGregor team needed a reliable solution that could deliver a top notch experience, even with the explosive growth expected by it, the company said in a press release.

Using a combination of out-of-the-box features and basic customisation, the August McGregor team brought its site to life in three short weeks, launching just in time for McGregor’s heavily-anticipated October fight. The site offers alternate checkout methods through PayPal, Apple Pay and Amazon Pay to better accommodate the mobile-first customer base, and the use of global shipping solution EasyShip enables the brand to reach its international demand with ease.

“Unlike the traditional luxury apparel market, August McGregor wanted to take a fresh approach to its curated offering. By releasing an entire capsule wardrobe as a ‘drop’, which often sell out within the first 48 hours, we’ve successfully managed to make luxury fashion more accessible to a broader audience,” said Michael Montanez, director of marketing at August McGregor. “To accommodate such a unique sales model of limited quantity products in each capsule, we required a robust ecommerce backend that could support a high level of traffic and conversions in a short time. BigCommerce’s dedicated enterprise support, transaction-per-second capability and stable architecture provided just the assurance we needed when going live with the site.”

“August McGregor has an incredibly unique brand personality that sets it apart from the competition and inspires loyalty among consumers. It’s critical those traits are reflected in the brand’s online presence, which can only be achieved through some level of customisation,” said Marc Ostryniec, global senior vice president of sales at BigCommerce. “Retailers like August McGregor that want to ‘whoop ass and look good’ are increasingly turning to BigCommerce for the platform’s ease-of-use, modern site design, configurability and impact on conversion. As a result, they have seen significant uptick in revenue at a fraction of the cost of other platforms.” (PC)

Cargo flight sector in China recovers to near-2019 level

The air cargo industry in China has recovered, nearing the 2019...