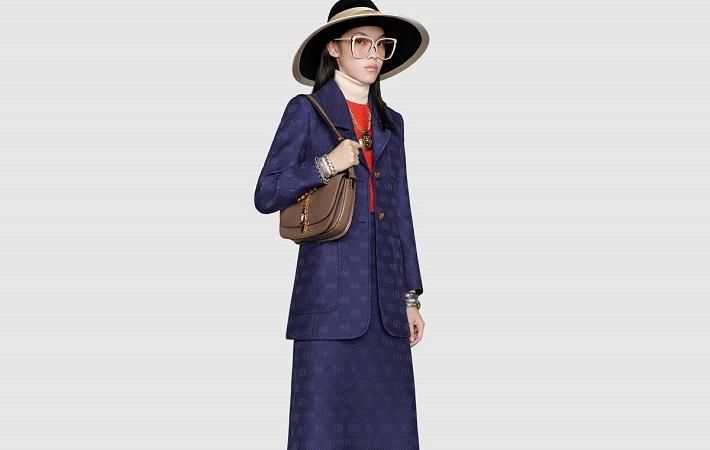 Pic: Gucci
Kering, a global luxury group, posted 16.2 per cent growth in consolidated revenue to €15,883.5 million in FY19 compared to prior year. Total revenue posted by the luxury houses in the Q4 FY19 rose 11.6 per cent on a comparable basis. Recurring net income grew 15.1 per cent to €3,211.5 million. Gross margin increased 15.5 per cent to €11,775 million.
The group reported that this strong performance in FY19 that ended on December 31, 2019, was fueled by substantial growth across all regions.
Sales in directly operated stores and online advanced 14 per cent on a comparable basis, propelled by very strong performances from Gucci, Yves Saint Laurent, Balenciaga and Alexander McQueen. Online sales surged 22.6 per cent year on year.
Wholesale revenue in FY19 from the group's houses rose 10.4 per cent on a comparable basis. Kering's luxury houses put in an excellent showing in the Asia-Pacific region up by 20.4 per cent despite political tensions and disruptions in Hong Kong in the second half of 2019, which impacted the group's business. Western Europe posted double-digit growth each quarter, with an overall progression of 13.7 per cent over the year. North America and Japan were up 6.7 per cent and 5.9 per cent, respectively.
In the fourth quarter, directly operated store network continued a strong uptrend, with comparable sales up 12.3 per cent over the quarter, up double digits in all regions except Japan, which felt the impact of the increase in sales tax.
Gucci generated an additional €1.3 billion in sales compared to 2018, with 2019 revenue at €9,628.4 million, up 16.2 per cent as reported. The very sustained 10.5 per cent growth in revenue in Q4 FY19 was fueled by the brand's growth momentum across regions and product categories. North America posted comparable revenue growth of 6.2 per cent on a comparable basis in the last three months of 2019 in directly operated stores.
With 17.5 per cent growth in revenue in FY19 advancing to €2,049.1 million, Yves Saint Laurent confirmed its growth trajectory. Revenue from directly operated stores and online rose 15.7 per cent, on a comparable basis. The House confirmed its excellent momentum in Q4 FY19 with revenue up 14 per cent on a comparable basis attributable to strong performances in Western Europe and North America.
Bottega Veneta generated revenue of €1,167.6 million in FY19, up 5.3 per cent as reported. In Q4 its sales advanced 9.4 per cent fueled by strong momentum in both retail and wholesale channels.
Revenue generated by Kering's Other Houses totaled €2,537.5 million in 2019, up 20.3 per cent as reported. In Q4 FY19, revenue of the group's other houses rose 17.2 per cent as reported, fueled by solid momentum at Balenciaga and Alexander McQueen.
The corporate and other segment reported 2019 revenue of €500.9 million, reflecting strong momentum at Kering Eyewear. In 2019, Kering Eyewear's performance was once again fueled by its Gucci, Cartier and Saint Laurent licenses, as well as by the recently acquired Montblanc and Balenciaga licenses.
The group reported in their outlook that it is continuing to implement Kering's strategy focused on achieving comparable revenue growth while ensuring the targeted and selective expansion of the store network in order to sustainably grow its houses and consolidate their profitability profiles.
The Group is also pro-actively investing to develop cross-business growth platforms in the areas of e-commerce, omni-channel distribution, logistics and IT infrastructure, expertise, and innovative digital technologies.