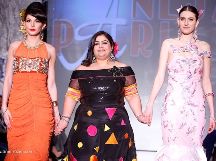 "I am very encouraged with my experience in New York Fashion Week," says designer Parul Aneja. "I want to bring my designs to runways all across the world. New York was a great inspiration."

Parul Aneja's Fall 2013 collection is conveniently priced pointed to buyers needs. Through a partnership with an apparel manufacturer, Parul Aneja can mass produce for worldwide department store and boutique placement.

Born in New Delhi, Parul Aneja began her fashion career surrounded by beautiful fabrics and vibrant colors. She received the Best Creative Designer Award presented by the National Institute of Fashion Design of New Delhi. She holds degrees from the National Institute of Fashion Design in New Delhi for fashion design and from Delhi University for commerce. She is currently living in Indianapolis, Indiana creating and designing evening, cocktail and prom dresses for women.