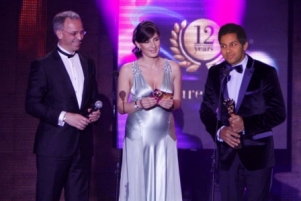 courtesy: The News Insight
Pritam Panda, the young Indian fashion designer, has bagged the coveted Youth Ispirazione-2012-13 title at the twelfth edition of Murex Global Fashion Awards.
The first-ever Indian to receive the prestigious Murex honour, the Odisha-born designer has been rewarded because of the wide-spread popularity of his multiple clothing lines, such as Pritam Panda, Couture for Cause, Prakshi and P4PP,  in India, France, UAE and other Middle Eastern countries.
In winning the glorious trophy, the designer, who is known for using Ikat, pata and Sambalpuri hand-woven fabrics in his eclectic collections, has beaten the other 4 nominees namely Sabbah Dagger (Italy), Jonathan Race (Dubai), Lee McGirth (China) and Avil Angrowlin (China) selected under the same category.
Panda was also nominated under the ‘Best Woman's wear-Foreign Designer’ label category of Murex for his sumptuous haute couture creations.
Held at a glitzy ceremony in Naples, Italy, the Murex Award, one of the most prestigious awards in the world of fashion and retail industry, was presented to the Indian designer by renowned Italian film star Andrew Symons and former Italian Miss World Famesa Lior.