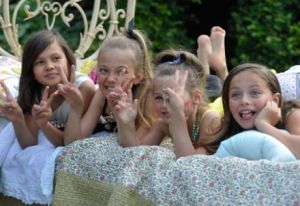 The 77th edition of Pitti Bimbo ended confirming the sector’s commitment in responding to international market trends with dynamism and quality.

The attendance figures confirm that around 5,800 buyers came to Florence (compared to 6,200 a year ago), with a total of just under 10,000 visitors.

The performance of foreign visitors was better than that of the Italians, with an expected total of 2,600 buyers (from over 60 countries), representing 45% of the total amount of buyers: whilst Italian buyers were around 3,200, a fall with respect to the 3,500 in June 2012.

Driving foreign attendance were the excellent performances by buyers from Russia (+11%, now permanently at the top of the list of international markets), the United Kingdom (+8.5%), Holland (+5%), Japan (+6%), Switzerland (+10%), and Eastern European countries (Romania, Poland, the Czech Republic, Ukraine and Belarus).

The figures were also good for the Middle East with excellent results for Israel and Kuwait, as well as good attendance from South Africa and Australia.  With regard to the most important European markets, the figures for Germany are confirmed whilst lower attendance is expected from Spain, France and Belgium.

“Pitti Bimbo has confirmed is role as a reference point for international children’s fashion,” says Raffaello Napoleone, CEO of Pitti Immagine. “This sector is characterized by liveliness, experimentation and high manufacturing quality.  These features were evident in the collections of the 460 brands present at this edition, all of which received extremely positive comments from the buyers and international press. Many new ideas were presented both in terms of product as well as marketing and distribution strategies.

“The final figures will clearly reflect market trends: Italy continues to suffer as it goes through a period of intense restructuring of the retail industry; foreign markets are continuing to drive Made in Italy, particular those countries that have a more robust GDP and are continuing to grow. Generally speaking this was a very positive edition.

“All the most important buyers attended and showed a desire to discover new ideas and make purchases. The exhibiting companies also gave their very best with their collections and presentations. The packed calendar of runway shows and events were very well received, as were the special projects and brands making their debut, with many, high profile names also attending this edition”.

India-based The Chennai Silks (TCS) has proven to be a shopperâs delight...