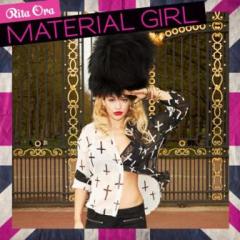 MG Icon, the joint venture between Iconix Brand Group, Inc. and Madonna has unveiled the first shots of international singer and performer Rita Ora, the new face for Fall 2013 collection of Material Girl, a fast-fashion junior collection brand inspired and designed in collaboration with Madonna and her daughter, Lola.
The model was signed up as the new face of Material Girl in May this year. Georgia May Jagger and Kelly Osbourne have earlier endorsed the clothing line.
The clips of the model donning the appealing Material Girl apparels and accessories have been shot at iconic locations of London like Big Ben, Buckingham Palace, the London Eye and on the top of a double decker bus.
In her pictures clicked outside Buckingham Palace, the model is seen wearing a black and white cross patterned shirt with her head covered with a black fluffy bearskin hat.
In another pose next to a red coloured phone box she can be seen cladded in a short sleeveless black dress flaying a Union Jack flag, and in a striped maxi dress outside the Houses of Parliament.
Talking about the association with Material Girl, Ms. Ora said, “To be handpicked by Madonna and her incredibly cool daughter Lola is the largest of all compliments.”
The marketing campaign is slated for an official release in fashion and lifestyle magazines in August 2013.
Presently, the Material Girl brand is only available at select Macy’s outlets in the US, and The Bay in Canada, Australia and Europe.