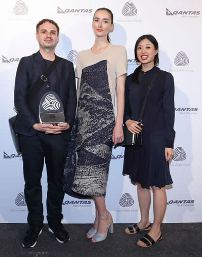 ffiXXed from Hong Kong were announced as the winners of the Asia selection for the 2013/14 International Woolmark Prize, during the award event held at the beautiful W Hotel in Hong Kong.

ffiXXed were awarded for their stunning wool dress which was inspired by a rug. There was a balance between the surface and form of a rug with the softness of the wool.

"It encourages innovation in the use of wool as a raw material, and also in terms of design and creativity.”

Bartley Ingram, Head of Art & Visual, Joyce explained: "The winning team did the best all round presentation. They really put together their ideas in a way that was clear to understand.

"They took every aspect of the competition into consideration and did it in a very innovative way. From their mood boards to the final product they thought about every detail and the purpose of the competition.

"Not only was their use of wool very modern, they created a very fashion forward capsule collection. And their business sense and explanation of the commerciality of their garment really put them in the lead.”

Chosen amongst the 10 most promising talents coming from all over Asia, the winner gains a financial contribution of $50,000 AUD, plus the opportunity to compete in the international competition, representing Asia at the grand final event, taking place in Milan in February 2014.

For the next six months the ffiXXed will be required to develop a capsule collection in Merino wool, to be showcased during an extraordinary event which will showcase the five finalists which will be selected from across the globe.

These designers will compete for the final international prize – an additional $100,000 AUD and the opportunity to be stocked in the most important retailers of the world including Harvey Nichols – London, Saks Fifth Avenue – NY, 10 Corso Como – Milan, Joyce – China, David Jones – Sydney and My Theresa – Germany and online.

Rob Langtry, Chief Strategy and Marketing Officer, The Woolmark Company explained: “We congratulate ffiXXed on winning the Asia regional prize. With the exciting expansion of the prize in this region, which now covers China, Hong Kong, Japan and South Korea, the Asia award is becoming more competitive and more interesting each year. We look forward to supporting ffiXXed and their journey toward the final event in Milanin February 2014.”