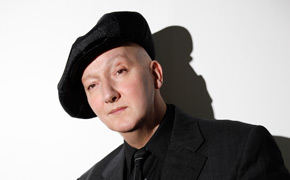 To celebrate the art of millinery and its influence on film and popular culture, each of the Headonism designers have created a Lone Ranger inspired mask. Stephen Jones who has mentored the designers and guided this special collaboration has created two hero masks. The star milliners are Aurora Ozma, Emma Yeo, Moody and Farrell, Piers Atkinson and William Chambers.

Stephen Jones has established himself as one of the biggest names at the helm of millinery in both the UK and internationally. His compelling designs often using radical materials, and range from the refined to the whimsical. Stephen’s exquisitely crafted, quixotic designs encapsulate the fashion mood of the moment and his era-defining edge attracts a celebrity clientele including Marilyn Manson, Pink, Gwen Stefani, Beyonce Knowles and Alison Goldfrapp.

“Who’s behind the mask? The observer or the wearer? A mask is the most magical expression of millinery. It’s a rejection and an invitation, it’s the tension of anticipation. As William Shakespeare said, “You wear a mask for so long, you forget who you were beneath it”- commented Stephen Jones OBE

All seven couture masks will be unveiled on the red carpet at the star-studded UK premiere for The Lone Ranger on Sunday 21st July, 2013 at the Odeon, Leicester Square with Stephen Jones and the Headonism milliners in attendance.

The masks will also be showcased for one night-only at a special event at Proud Galleries in Camden on Thursday 25th July, 2013 where Disney and Proud Camden will present an evening of fashion, film and music in a one off pop up saloon event inspired by The Lone Ranger.

Caroline Rush, CEO of the British Fashion Council commented, “It’s great to see Disney championing Stephen and the Headonism milliners by calling on them for this special project. The collaboration celebrates the theatrical and is a wonderful opportunity for the best of British creativity to have a red carpet moment here in London. The designers involved have a completely diverse design aesthetic so I’m looking forward to seeing what kind of creations they’ll unveil at the premier”.