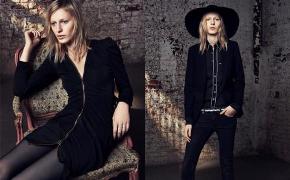 This fall, the Scandinavian fashionistas are in for a series of sartorial treats as the young fashion designer duo ‘Ashley Olsen and Mary-Kate Olsen’ have joined hands with the womenswear label Bik Bok to create not one but three separate collections.
The 27-year-old twin sisters have recently released the first line titled ‘Scandinavian It Girl’ of their Fall-2013 Bik Bok collaborative venture at a glitzy event in Oslo, the capital city of Norway.
Replete with their personal style statement, the newly launched range features leather and wool jackets, angora knits, washed silk chiffon blouses, superfine jersey tops and Super Flex fabric made scarves and pants.
“Ashley and I are thrilled with our Fall 2013 Bik Bok collaboration. We feel the collection reflects our personal style and will connect with the Scandinavian girl”, said Mary-Kate Olsen in a statement.
“We’ve enjoyed the design process with the Bik Bok team and are excited to visit Oslo and Stockholm to launch the first of three collections in August”, said Ashley Olsen.
Ashley Olsen and Mary-Kate Olsen have recently won the prestigious CFDA Womenswear designer of the year award and have also been enlisted in the coveted Art & Design category of the American business magazine Forbes’ ‘30 Under 30 – Art & Style’ list.
Founded in 1973, the Scandinavian brand Bik Bok operates around 160 stores across Norway, Sweden, Finland, Denmark and Latvia.