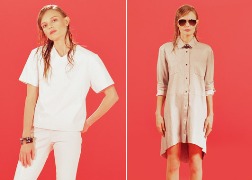 courtesy: fashion.telegraph.co.uk
The partnership between American model-turned-actress Kate Bosworth and British retailer Topshop has once again fructified into a new fashion collection.
The 31-year-old California-born beauty has recently unveiled a 46-piece autumn-2013 range, designed collaboratively with the high-street purveyor’s creative team.
A harmonious amalgamation of masculine and feminine looks, the newly launched capsule line is designed both in tailored oversized and fitted slim silhouettes.
Based on an autumnal palette of white, black, rich red and specks of metallic silver, the luxurious minimalistic pieces include collarless shearling coats, biker pants, cashmere T-shirts, leather skirts and shirts made from silk and chiffon.
Other than launching the collection, Topshop has also released a campaign, shot by Hollywood’s renowned director Michael Polish, featuring the leggy Bosworth clad in pieces from the new range.
The line is available in Topshop’s brick-and-mortar stores and online.
In the past, the Hollywood beauty and the retailer have co-designed two collections—one a special Christmas line (2012) and the other a Bohemian festive range, introduced earlier this year.
Founded in 1964, the British multinational retailer Topshop operates nearly 440 shops in more than 33 countries.