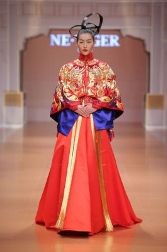 China International Fashion Week opened ceremoniously on October 25, 2013. At the opening ceremony, a lot of celebrities and prominent figures, wearing fashionable and luxury clothes, gathered in the Banquet Hall of Beijing Hotel.

As a high-class fashion brand, NE.TIGER has led the opening show of China Fashion Week for 12 times in a row and will do it for the 13th time. NE.TIGER 2014 "Great Yuan" Haute Couture Fashion Show will present itself on the red carpet.

China International Fashion Week opened ceremoniously on October 25, 2013. At the opening ceremony, a lot of celebrities and prominent figures#

In this fashion show, NE.TIGER extracts creative ideas from the arts like Yuan Verse, Yuan Blue-white Porcelain, Yuan Totem, etc. With respect to color, it is based on blue and white that are light and elegant, and decorated with the five national colors that symbolize Chinese ancient civilization, in order to show the Yuan Dynasty's beauty of robustness, elegance and compatibility to the fullest.

As for material, the valuable and precious Nanjing brocade and Kesi silk are used and combined with velour, fur and lace innovatively. In terms of craftsmanship, the ribbon embroidery, which has vivid visual effect as well as consummate and colorful stitches, is used for the first time, with the exquisite knotting and Suzhou gold embroidery used in combination with a synergetic and brilliant effect, which shows the firmness and persistence of NE.TIGER to preserve and develop Chinese traditional handicrafts.

Chinese dress has been a long-standing legend since its very beginning. NE.TIGER 2014 "Great Yuan" Haute Couture Fashion Show will express the profound conception of NE.TIGER concentrating thousand years of civilization, and show the world the greatness of Chinese custom and etiquette as well as the beauty of Chinese dress.