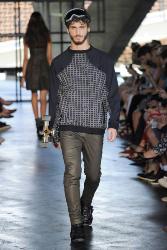 The fashion week in Rio de Janeiro confirmed that jeans is the highlight for Winter 2014. Resin, metallic, original blue Jeans and Black denims were on the catwalk with some variations on streetstyle and tailoring.

In this scenario, Vicunha’s denims and twills were selected as key-items designed by Herchcovitch, tng and R. Groove, brands that could appropriate the versatility of the items to their fullest, creating a modern look with a strong presence. A common point between the brands was the use of denim on its raw version, only with soften-ing and some metallic effects.

Herchcovitch, under the creative leadership of Alexandre Herchcovitch, brought us a line inspired on the Medieval Knighthood, with looks that made references to knight armours from the Middle Ages. The brand, focused on jeans, led with items highlighting elbows and knees to ensure fluid movement, and tight pants under dresses, parkas and male skirts.

Vicunha was present on the catwalk with the Azealia serge, basis for male jackets, pleated skirts, dresses and superfit pants. Combining the resin finishing treatment with a slightly golden metallic gleam, the Azealia fabric is versatile for both male and female shapes, grant-ing a modern touch and even more brightness to the leather effect.

Celine denim, with a deep blue shade, received perfectly the cuts and pleats of overalls and parkas. Without the inter-ference of washing treatments, the items only went through the softening process, preserving the original colour of the jeans. The super-intense black dyeing of the Max Drake premium denim was evident on the female jacket fit to the body and on the versatile male parka with broad and comfortable modelling.

Thiago Fragoso, Marcello Antony and Danielle Winits opened tng’s fashion show, presenting a Jeanswear style with strong presence and punk rock look. The golden metallic gleam were in dominant in the looks, in boots, pants and jackets, by applying tacks, spikes and fringes. Azealia serge is a perfect base to receive these interventions, showing in tighter pants, jack-ets and tops the regal metallic details.

Besides metallic leather look, tng’s fashion show presented white jeans of crackled texture, which also took over the looks in the runway. Such effect was applied on Vicunha’s Max Drake and Arika premium denims, which received this treatment on a raw base.

The black and intense blue colours, which are the original ones in the fabric, could be seen on the seams, the interior part of the pockets, the lapel and the inside of the collars of jackets and vests, which created an interesting contrast to the look. Even the shirt line, which was creat-ed on the Veneza satiny gleam serge, received this effect.

Blue jeans, however, also had its space in the collection and shared with the black jeans the different pants models. The bases chosen were Max Drake, Becky – black – and Julia – blue. Textures, zippers, patchwork, torn and worn effects were the chosen ones on the fabric in its raw version.

Twintex has recently launched a 360-degree virtual tour on its...

Athleta is set to enter into Canada this year, marking the...

The Chinese e-commerce market is set to grow from $2.1 trillion in...