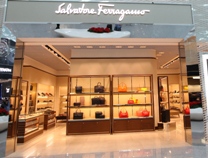 The Salvatore Ferragamo Group, one of the world’s most renowned luxury brands, continued to grow and expand in international markets, with a host of new store openings in China during 2013. Since April, the “Made-in-Italy” luxury label has inaugurated four new stores in Mainland China, including two in Shanghai, one in Dalian and one in Wuxi.
In Shanghai, the Florentine brand consolidated its presence with the opening of its third and fourth mono-brand boutiques, one in L’Avenue, a luxury shopping centre located in the new residential area adjacent to Hongqiao, and the other in Times Square on the Huaihai Lu shopping street. The Group also extended its reach and expanded further with two new stores in as many tier 2 cities.
In Wuxi, one of the oldest Chinese cities on the banks of the Blue River, Salvatore Ferragamo opened the first mono-brand boutique in Center 66, a new shopping mall for luxury brands, while within the historic port of Dalian, one of the most picturesque cities in Northeast China, Ferragamo’s new store is situated in the city’s most exclusive shopping centre, the prestigious Dalian Times Square.
Each of the new boutiques features Ferragamo’s signature style and elegance, creating a refined, understated ambience with a decor that reflects the design concept for Salvatore Ferragamo stores around the world. The furnishings, colours and structure of the space are perfectly balanced to welcome guests in an intimate atmosphere and offer a modern shopping experience.
The Salvatore Ferragamo Group has continued to pursue travel retail openings as well, with new store openings in the Shanghai Hongqiao, Hangzhou and Shenyang airports, in addition to the recently unveiled Shenzhen airport designed by the celebrated Italian architect Massimiliano Fuksas.
Thanks to these new openings, the Salvatore Ferragamo Group has further strengthened its presence in Mainland China, where it has been active since 1994 and currently boasts 55 retail stores and 20 travel retail doors. Overall, the Group currently has 75 stores in 36 cities in Mainland China.