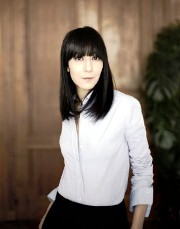 Bouchra Jarrar
Bouchra Jarrar, the highly talented French fashion designer, is the latest to receive the esteemed haute couture appellation by the French fashion industry governing body Chambre Syndicale de la haute couture.
The designer has now joined the prestigious list of other 15 fashion houses with haute couture appellations such as Alexis Mabille, Chanel, Azzedine Alaïa and Christian Dior.
The designer, who has been showing as a guest member in the Parisian haute couture week calendar since 2010, will now showcase as a permanent couturier on January 21, 2014, at the forthcoming edition of the prestigious sartorial event.
Known for her sleek, minimalistic designs, Jarrar has earlier worked with industry bigwigs like Jean Paul Gaultier and Balenciaga.
The Chambre Syndicale de la haute couture is the regulating commission which determines the eligibility of fashion houses that are fit to be true haute couture labels.
The Haute Couture status of designers could be maintained by adhering to some strict standards, such as each designer must offer made-to-order ensembles for private clients, employ minimum 15 workers in a Parisian atelier and present a collection in January and July schedules of haute couture fashion weeks every year.