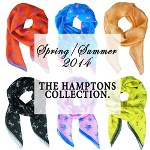 Leading luxury women’s scarves line, Terracotta New York, is proud to unveil its Spring / Summer 2014 collection at the ENK Accessorie Circuit trade show January 6-8th, 2014.
The new Spring / Summer Hamptons Collection infuses prominent summer icons like crabs, beach umbrellas, starfish, sea turtles, and more. All Terracotta scarves are made of 100 percent silk in Italy with hand-hemmed borders.
“We’re very excited to reveal our new Spring / Summer 2014 prints and fresh colorways at Accessorie Circuit,” says co-founder Alina Cheung. “A number of Terracotta fans suggested various ocean prints so we decided to release a full collection around that theme.”
Terracotta New York will be at Booth #3121 within the “Fraiche” section of Accessorie Circuit. The three-day show will be taking place at Piers 92/94 12th Avenue at 55th St., New York.
Accessorie Circuit is a comprehensive women’s accessory and footwear exhibition featuring designer and fine jewelry, handbags, footwear, scarves, belts, and gift items. The trade show is held three times a year during the January, May and August NYC market weeks.
Fraiche Circuit is a newer platform for emerging designers within Accessorie Circuit that includes a curated selection of inspired talent that was handpicked based on their creative skills, craftsmanship, quality and originality.
About Terracotta New York:
Inspired by the long-standing tradition of simplicity and pattern in menswear, Terracotta New York brings you Italian-made luxury scarves and androgynous bow and neck-ties for women. Created by two former investment bankers, Terracotta has a touch of feminine flare, proving women can have just as much fun with a bow tie and a penguin pattern.