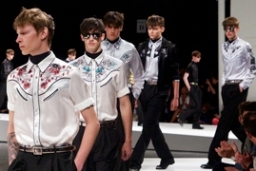 In a global first and launching on Monday 6th January at 11.30am, one can follow the front row with Topman when they take one behind the scenes of the menswear fashion show with an exclusive Google+ Shoppable Hangout.

This will be fronted by co-hosts Darren Kennedy (TV Fashion expert and fashion writer) and Becca Dudley (MTV UK Presenter). Alongside Darren and Becca will be YouTube Stars Jim Chapman and Marcus Butler plus other Topman ambassadors, they will all share their experience of London Collections: Men.

On top of this Topman will be placing wearable ‘Autographer’ cameras on all the hosts including exclusive ambassadors from the BFC, Topman Personal Shoppers, Street Style Photographer Jonathan Pryce and their fashion show PR and Production teams to capture all their unique LC:M activity during the day.

The camera’s exclusive footage will then be uploaded to Topman Generation  for consumers to view and enter a daily competition to win one of the cameras each day during London Collections: Men.

Marvin Chow, Marketing Director for Google+ said: “We’re thrilled to be working with Topman to allow fans to experience this season’s fashion show using the Google+ Shoppable Hangout app. Topman has done an amazing job of creating an unprecedented experience through Google technologies with Google+ Hangouts to connect fans with the highly coveted models, designers and influencers behind popular culture and fashion.’’

Jason Griffiths Topman Marketing Director said: “We are excited to be working with Google on this Campaign to showcase Topman’s continued involvement at the forefront of London Collections: Men. Whilst taking users behind the scenes via exclusive access is great, the ability for them to then shop in real time for what our hosts will be wearing whilst they are talking to camera is a brilliant digital innovation and both we and Google can’t wait to see the results.”