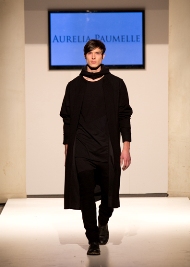 Debuting its new segment ‘NOT COUTURE · HOT COUTURE’ THE GALLERY BERLIN, held at the at the ›Opernwerkstätten‹ venue from 14 - 16 January 2014, also opened up this area featuring lifestyle, beauty and accessories for end consumers on the second day of the fair. 200 brands, including about 70% new exhibitors, showcased their collections here during Berlin Fashion Week.

Also presenting young, international designers alongside lifestyle products The ‘NOT COUTURE ·HOT COUTURE’ Fashion meets Lifestyle concept proved a success. As hoped, the event attracted those on both the supply and demand side and I am delighted that our ideas have gone down so well, said Ulrike Kähler, Project Director National Trade Shows at the Igedo Company, summing up the mood.

Alongside the tried and tested exhibitor portfolio for contemporary design on the first floor of the location it was new collections from young Russian and Polish designers than impressed visitors in particular. They especially highlighted the cooperation with the Polish Institute and the Department for Trade and Investment at the Embassy of the Polish Republic in a workshop entitled ‘The Development of Fashion Production in Poland’ as well as the different subsequent fashion shows showcasing Polish designers.

Alongside the famous designer Dawid Tomaszewski, who assumed mentorship for some of the designers, Polish Ambassador Dr. Jerzy Marganski also attended the trade fair and opened the fashion show programme featuring sponsored designers with a laudatory speech.

The collaboration with the agency Showfloor – that presented 6 different shows on the catwalk area at ›Opernwerkstätten‹ on the first day of the fair including the likes of NIX BERLIN, PROTOTYPE SCHUMACHER and BATTENBERG-CARTWRIGHT – generated high footfall on all floors of the venue.

The decision to continue the second day of the event as a show day also proved the right decision. Commenting on this Philipp Kronen, Managing Partner at Igedo, said: “For this edition of THE GALLERY BERLIN we had a number of innovations in focus. Our expectations in terms of visitor numbers were more than met with 3,100 trade visitors.”

Bookings are already coming in again for the next edition of THE GALLERY BERLIN, to be held once again at the ›Opernwerkstätten‹, from 8 to 10 July 2014.