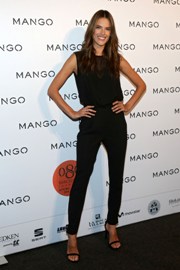 MANGO revealed the key trends for the Spring/Summer 2014 season. The emblematic setting El Mercat del Born brought national and international celebrities together, where the new Mii by MANGO car, created in collaboration with SEAT, was also presented.

Alessandra Ambrosio was given the task of opening the catwalk, which was chaired by Jonathan Andic, Vice-Chairman of the company. The Brazilian model, together with Ireland Basinger Baldwin and Sylvie Meis, among others, added an international touch to an event that was attended by over 800 persons.

44 women’s and 18 men’s outfits revealed the new trends of the forthcoming season. MANGO presented designs in which a quest for the sport essence and trend revealed a decidedly 90s influence. The minimal concept was the leitmotiv of the collection, in which neutral tones and total white outfits were abundant. The variety of materials such as poplin and neoprene, as well as a combination of textures, added force to designs featuring   straight cut silhouettes, crop tops and high-waistband trousers.

For its part, the men’s collection revealed young and urban lines of the classic marine style. Breaking with the traditional tastes, fabrics with army or micro tie prints were presented. Natural colours and more intense tones such as indigo blue and “rorange” epitomised the tonal diversity of the collection for the summer season.

As a first for this edition, models from the new Violeta by MANGO collection were also presented. The different cut, adapted to curvy female forms, represented the essence of a line created for today’s style. Minimalist designs with clean and neutral silhouettes revealed the recent MANGO line.

Similarly, the MANGO Kids line was also present with looks in accordance with the minimalist inspiration of the fashion show. Simple garments with renewed lines, featuring white as the predominant colour.

After the fashion show, MANGO continued the celebration in the famous Estació de França building, where the guests enjoyed a cocktail party organised by Catering Can Jubany.

Oswal Prints Private Limited has been manufacturing and exporting ethnic...