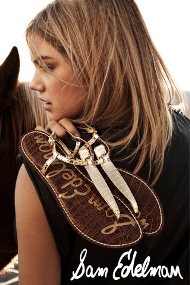 For the second year, Kate Upton will be the face of Sam Edelman’s spring advertising campaign. The campaign was shot by photographer Craig McDean on a private beach in California. Trey Laird directed the campaign styled by Karl Templer.
“Kate is the model of the moment, and I’m thrilled to have her as the face of the brand again”
“Kate is the model of the moment, and I’m thrilled to have her as the face of the brand again,” said Sam Edelman, founder of Sam Edelman Shoes and division president for the Sam Edelman Division of Brown Shoe Company. “The Sam Girl is aspirational and knows all the latest trends, whether it’s fashion, the newest workout or hottest models. They all want to look like Kate.”
The Sam Edelman spring collection is a mixture of boy-meets-girl looks inspired by the 50s St. Tropez beach towns style of dressing and combined with the more masculine London street styles. Nude palettes and natural leathers with touches of camo are used throughout.
The images from the shoot will appear in print ads in Vogue, Harper’s Bazaar, InStyle and Women’s Wear Daily, billboard and wild postings, online, and at samedelman.com, as well as in Sam Edelman retail stores.
ABOUT SAM EDELMAN
Since its inception in 2004, designer Sam Edelman’s eponymous brand has quickly emerged as a favorite among celebrities and fashionistas around the globe.
Bringing more than 30 years of experience developing some of the most successful shoe collections in fashion history, Edelman’s designs reflect his creative sensibility, delivering footwear that is eminently fashionable and beautifully constructed at an attainable price point 2012 was a banner year for the brand, with the launch of outerwear and accessories collections and a flagship store opening in Soho extending the company’s retail reach.
It also marked the debut of Sam Edelman’s juniors’ line Circus by Sam Edelman, helping Sam Edelman Shoes earn Footwear News’ Brand of the Year for a second time in the brand’s history. In 2013 the brand launched a jewelry collection and announced their expansion into apparel for Fall 2014. The Sam Edelman brand is owned by Brown Shoe Company.