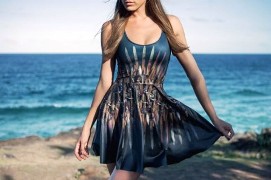 courtesy: themarysue.com
After establishing an enormous fan base internationally, the extremely popular American fantasy drama television series ‘Game of Thrones’ has now become the subject of a new clothing line.
The Australian casualwear manufacturer Black Milk Clothing is soon going to release a womenswear collection based on the HBO show.
Slated to be available for sale from March 11, 2014 onwards, the range features leggings, skirts, dresses and shirts, printed with images of dragon eggs, Westeros map, T-Stark family members and the iron throne.
Known for its printed leggings, Black Milk Clothing is based in Brisbane, the capital and most populous city in the Australian state of Queensland.
Other than the Aussie firm, an online apparel company called Voxpopclothing.com has an entire line of printed T-shirts dedicated to the eerie fantasy drama.
A brainchild of David Benioff and D. B. Weiss, Game of Thrones is an adaptation of George R.R. Martin’s bestselling ‘A Song of Ice and Fire’ fantasy novels. Its upcoming fourth season will be premiered on April 6, 2014.