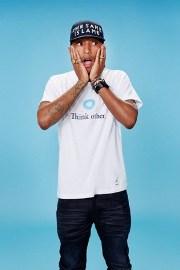 courtesy: vogue.co.uk
Popular American rapper Pharrell Williams has entered into a new collaborative deal with the Japanese clothing brand Uniqlo.
As part of his I Am Other creative collective, the chart topping ‘Happy’ hitmaker has created a new line of limited-edition T-shirts and hats for the retailer.
Slated to be available for sale from mid-April, 2014, onwards, the collection will be sold under the Uniqlo’s re-branded printed T-shirt line The New Model T.
Other than designing the range, the 40-year-old musician will also appear in all the visual campaigns of the collection, which will be sold in nearly 14 countries, including the United Kingdom.
Founded in 1949, Uniqlo is a casual wear designer, manufacturer and retailer with operations in China, Hong Kong, Taiwan, France, Malaysia, the Philippines, Russia, Singapore, South Korea, Thailand, the United Kingdom, the United States and Indonesia.
Apart from the Uniqlo line, Pharrell Williams is also involved in a sustainable fashion project called RAW for the Oceans with the famous denim manufacturer G-Star RAW.