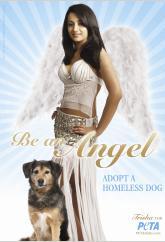 Many people would say that Trisha Krishnan has been blessed with the looks of an angel. But now, the award-winning actor is asking her legions of fans to be angels for animals once again.
That's because Krishnan is featured wearing angel wings and a stunning white and gold ensemble by designer Chaitanya Rao in a brand-new ad for People for the Ethical Treatment of Animals (PETA) India. In the ad, released just in time for World Stray Animals Day (4 April), she appears with a rescued dog.
The ad reads, "Be an Angel: Adopt a Homeless Dog", encouraging people to adopt a dog from an animal shelter or the streets. This is the second time that Trisha has worked with PETA encouraging her fans to be angels for animals. The ad was shot by ace photographer G Venket Ram.
In a previous PETA interview, Krishnan told the heartwarming story of how she rescued her own dog, Cadbury, who passed away recently. "I found him … in Hyderabad [while] I was shooting for a film", says Krishnan, who recently won a special award at the SIIMA Awards 2013 for 10 years of excellence in cinema.
"We were just driving past, and we saw this small little puppy who was wounded and he couldn't walk, and he was lying in the rain." After Cadbury received medical care, he spent every day with Krishnan on the set. "There was no looking back", says Krishnan. "He came back home with me. He is like the son I never had."
Across India, stray dogs and cats struggle to survive on the streets. Many of them starve to death or are injured, hit by vehicles or abused. Countless others are left to languish in animal shelters because there aren't enough good homes for them.
PETA and Krishnan want people to know that they can bring joy into the life of a homeless dog or cat – and into their own lives – by adopting a lovable and loving homeless animal. And in order to take a bite out of the homeless-animal crisis, PETA encourages everyone to have their animal companions sterilised.