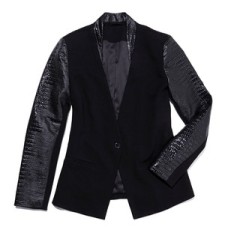 courtesy: WWD/Courtesy Photo
NeNe Leakes, the actress from the popular American reality television series ‘The Real Housewives of Atlanta’, is soon going to launch her much-awaited maiden clothing collection on the US-based 24/7 television shopping channel Home Shopping Network (HSN).
Slated to be available for sale from July 2014 onwards, the 19-piece collection will feature clothing fit to be worn from day to night. The line will include an array of dresses and separates, such as knit tank tops and faux leather blazers, in sizes ranging from 2 to 24.
The 46-year-old star, who is prepping up to join the famous Canadian entertainment company Cirque du Soleil, has recently announced on her Instagram page, “Not only will I join Cirque Du Soleil #zumanity I have also joined the #HSN family with my amazing fabulous clothing line! Available in July sizes 2 to 24.”
Launched in 1982, HSN has earlier collaborated with several well-known designers like Colleen Atwood and Reem Acra.
Linnethia Monique “NeNe” Leakes has won Bravo A-List Award for Reality’s Guiltiest Pleasure in 2009 and has been voted by Entertainment Weekly‘s PopWatch blog as one of the fall’s TV: 15 Stars to Watch in 2008.