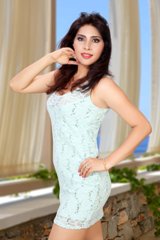 IndyaNewz
Glam doll on her way to Hollywood, Anjana B shot with designer Raymond Fernandez on Sunday for the IndyaNewz.com Bollywood Fashion Fiesta. Anjanaa B has been signed on for a Hollywood film and has already started working on the project, it hears.
The hot Bengali bombshell who acted in films like Zilla Gaziabad, Right Ya Wrong, Chashme Baddoor and has done ad films like Vithoba dantmanjan, Nmart, Zalim lotion, Kabjamrut, etc., also recently did a sizzling wet-saree special photo shoot or look test for a Hollywood director David S Wolfe who was in Mumbai to sign on two actors.
She has also been doing theater for the last 5 years and has acted in plays like Uncle Samjha Karo, See No Evil Hear No Evil and Get rid of my Wife. She has also been learning and practicing Indian classical dances like Bharatnatayam and Kathak for the last ten years.
The proposed Hollywood film has excerpts of the Kamasutra entwined into its script, which will be very aesthetically shot in locales like Scotland, Thailand and in southern parts of India including Goa and Pondicherry, sources told IndyaNewz.com. David Wolfe of Weeping Shadow Films from Sussex, Great Britain also met with a well-known Bollywood hero – whose name has been kept under wraps as his artiste agreement has still to be registered with the concerned authorities. But it seems, the young actor is known for his muscular body and physique and has featured in 4-5 Bollywood films including one with John Abraham.
IndyaNewz.com Fashion Fiesta is a mega-glamour fashion event - a la mini fashion week - to be held in Mumbai in June 2014. About 10 fashion designers will showcase their collections with over 100 models participating in the day-long event which will conclude with an awards ceremony. The event is slated to be held at a prominent 7-star hotel in North Mumbai. Several Bollywood stars are expected to attend the IndyaNewz.com Fashion Fiesta.
According to an IndyaNewz.com report the film titled Love and Passion in India features Anjanaa B, a well-known Bollywood hero and another Indian model as well as two female Hollywood actors, the names of whom are not yet released.