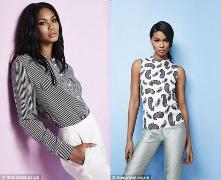 c: Daily Mail/theoutnet.com
Discount designerwear web store The Outnet is turning five this year and to bring in the celebrations with fervour and panache the retailer has roped in some of its best-selling designers to create an exclusive 17-piece collection.
Slated to be launched on April 29, 2014, the fifth anniversary range will feature an array of stylish clothing and accessories, created by the likes of Alexander McQueen, Preen by Thornton Bregazzi, Chloé, Oscar de la Renta, Eddie Borgo, Antonio Berradi and Nicholas Kirkwood.
The range includes a Jason Wu floral dress, a biker-style fitted T-shirt from the house of Balmain, an Issa blue and white printed maxi, Iris & Ink’s pussy-bow blouse, a Preen square pastel patch print pencil skirt and a JW Anderson paisley print top.
The online retailer has roped in the African-American model and the former Victoria’s Secret Angel Chanel Iman to model the high-end fashion line.
To escalate the celebratory mode a bit higher, the web store has recently launched a live video featuring seven industry key players such as Garance Doré, Leandra Medine, Alexandra Richards, Jessica Hart, Caroline Issa, Leigh Lezark and Harley Viera-Newton.
The Outnet, the sister firm of net-a-porter.com, was founded in 2009. The online store is devoted to selling discounted designer womenswear and accessories.
The Net-A-Porter Group Limited is the world’s premier online luxury fashion retailer.

Global fashion sales and economic profitâa measure of value where...

The value of textile and garment exports from Pakistan rose by 3.78...

Textile Events is one of the largest textile fair in the United Kingdom,...