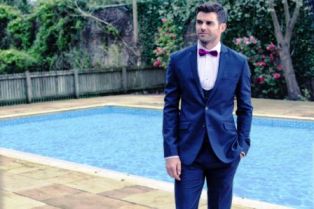 courtesy: Manchester Evening News/Chess London
Famous English cricketer James Anderson is the latest to don the cap of a designer, as the 31-year-old pacer has joined hands with the UK based bespoke menswear label Chess London to launch a limited-edition fashion range.
Slated to be available for sale from May 1, 2014 onwards, the spring/summer collection has been created jointly with the clothier’s design team and the cricketer himself. Made from fabrics produced by manufacturers based in the United Kingdom and Italy (Canclini), the tailored line features classic athletic slim fit cuts.
Targeted towards men with athletic frames, the James Anderson Collection includes t-shirts, shorts, shirts and a formal bespoke checked three-piece suit.
Other than giving his creative inputs into the range, Anderson has also modelled some of the pieces from the capsule range.
Launched in 2010, Chess London specializes in customized athletic slim fit menswear. The label’s eminent clientele features the England cricketer Luke Wright and Wasp’s Christian Wade, Manchester United’s Phil Jones and Olympic champions Mark Hunter and Alex Gregory as well as NBA All-Star Luol Deng.