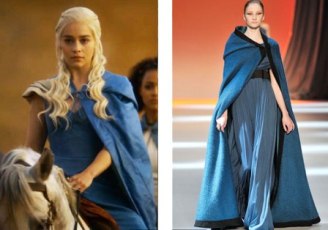 Daenerys Targaryen Vs Giambattista Valli FW 2009/c: Elle
Once again with its ongoing fourth season, the popular American fantasy drama television series Game of Thrones has succeeded in seeking the attention of not only its loyal viewers but also the fashion experts from all around the world.
According to Elle, the show, along with its gripping storyline and the exceptional costumes designed by costumer Michele Clapton, has managed to inspire a blog by New York-based leatherwear specialist Zana Bayne on social microblogging site Tumblr.
Titled as GoTRunway, the write-up compares the outfits worn by the characters of the TV series to some of the most breathtaking runway pieces created by eminent design houses of the world.
Some of the dresses mentioned in the blog are the character Margarey Tyrell’s funnel dress in season two which was inspired from Alexander McQueen’s Bjork’s, the flowing blue robe and gown combo donned by Daenerys Targaryen has a semblance of Giambattista Valli’s F/W 2009 creations and Christopher Kane’s scale adorned piece from S/S 2009 line is similar to the costume sported by Edmure Tully in the show.
Other than the runway-influenced designs, as claimed by designer Zana Bayne, the HBO show’s fashion seems to have also succeeded in inspiring label Helmut Lang’s leather and fur layered Autumn/Winter 2012 collection, crafted by its designers Nicole and Michael Covolos.
Also, the Australian casualwear manufacturer Black Milk Clothing offers a range, which includes leggings, skirts, dresses and shirts, printed with images inspired from the eerie series such as dragon eggs, Westeros map, T-Stark family members and the iron throne.
A brainchild of David Benioff and D. B. Weiss, Game of Thrones is an adaptation of George R.R. Martin’s bestselling ‘A Song of Ice and Fire’ fantasy novels.