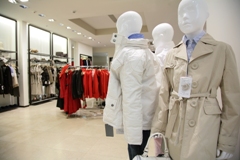 Chinese consumers will continue to represent a key growth factor for the luxury goods market in 2014: in light of this, Exane BNP Paribas and ContactLab have produced the China Reality Check (2014) whitepaper. This new report by Exane BNP Paribas is based on their analysis and interpretation of the major findings from ContactLab’s Luxury Digital Behaviour Study.
This study was conducted at the beginning of the year. It provides new information for analyzing the relationship between consumers and high-end clothing and accessory products in two particularly developed and competitive markets: the metropolitan areas of Shanghai and New York. ContactLab’s research project draws on a representative sample of circa 1,000 residents between the ages of 25 and 54 for each of these two cities.
Exane BNP Paribas’s fresh perspective and interpretation of this data focuses on the behaviour of luxury goods consumers living in Shanghai. The results reviewed by the analysts on the one hand confirm but on the other hand debunk certain ‘myths’ used to describe Chinese consumer habits and their passion for luxury clothing and accessories.
The interviewed Chinese consumers confirmed their love of luxury goods, spending much more compared with consumers interviewed in New York. This applies to Chinese consumers who have the same income as their American counterparts and also for those who have a lower income. Furthermore, it emerges that in general the Chinese spend much more than Western consumers, including Europeans.
Over the last 12 months, when compared with consumers living in New York, we can see that Shanghai consumers have spent over one and a half times more on luxury clothing (1.5x) and shoes (1.4x), as well as over double (2.3x) on purchases of designer handbags.
Moreover, they say that they plan to spend even more in the future on luxury goods: in fact, they say that they will spend 74% more on their next item of luxury clothing, 4% more on shoes and 27% more on handbags, despite the very significant budget they already spend on these categories of consumer goods. New Yorkers are still in the race however: in fact, they say that they will spend 55% more on clothing, 5% more on shoes and 48% more on handbags; yet they still fall short of the Chinese in terms of their absolute spend prospects.
The analysis of spontaneous luxury brand awareness among Shanghai residents has debunked a number of stereotypes. In fact, Exane BNP Paribas analysts have highlighted how the interviewed consumers have seemingly not yet developed a sophisticated knowledge of fashion; their spontaneous awareness of major luxury brand names is still limited compared with the awareness shown by New Yorkers and it is focused on a few famous brands in the collective imagination.
More Fashion News - Italy...