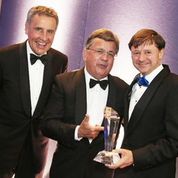 Founder of the British-made fashion brand, David Nieper, and his son, Christopher Nieper, have been honoured with a Lifetime Achievement Award at the 2014 ECMOD Direct Commerce Awards, for their outstanding contribution to British fashion and the home shopping industry.
The father and son team, were recognised at a gala awards ceremony at the Hurlingham Club, London on 5 June 2014, for their 50 year commitment to British-designed and British-made fashion and building of the successful David Nieper brand – which is sold direct-to-consumers in the UK and overseas.
David Nieper established his namesake company in 1961, designing and manufacturing luxury lingerie and nightwear in Alfreton, Derbyshire. Christopher Nieper, who joined the company in 1986, is managing director and his father David Nieper remains the company’s creative director.
A second-generation family business, David Nieper is still based in Alfreton and is currently enjoying its highest-ever level of sales.  The company exports over a third of its British-made fashion globally, with the style conscious French, providing the company’s biggest overseas market.
Nigel Swabey, President of the CatEx Direct Commerce Association and Chairman of direct retailer Scotts & Co, who presented the Lifetime Achievement Award, said:  “Ever since the launch of the first David Nieper colour catalogue in 1984, I have been tracking the remarkable progress and achievements of this dynamic father and son team and I’m full of admiration for what they have done to build their business and establish David Nieper as a quintessentially British brand.
“Whilst the vast majority of UK clothing brands have abandoned UK garment manufacturing, David and Christopher have stuck to their guns and persevered with UK design and manufacture across their range. They have succeeded with this strategy by making a virtue of the very ‘Britishness’ of their designs and the quality of their manufacturing process.
“Many congratulations to both David and Christopher. Together with their team in Alfreton, Derbyshire they have created a company and a brand of which they can be very proud indeed.”
Previously selling through well-known retailers such as Harrods and Selfridges, David Nieper took the bold decision to switch to sell direct to consumers in the late 1980’s, and in so doing never left Britain – despite the offshoring of many of the UK’s retailers and fashion manufacturers that went overseas in search of low cost labour.
More Fashion News - United Kingdom...