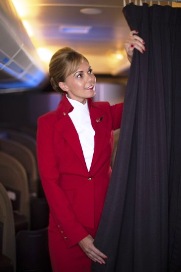 Female cabin crew uniform
Veteran English fashion designer Vivienne Westwood has recently unveiled her much-awaited British airline Virgin Atlantic’s redesigned uniform collection.
Meant for the international flight company’s 7,500 employees, including cabin crew, pilots, and the staff at clubhouse and Virgin Holidays, the range is made using polyester yarn derived from recycled plastic bottles.
Replete with nano finish to extend the life of the garments and retain its original colour, the 22-piece line is incorporated with hand drawn wing motifs, 1940’s French couture style cuts and smart tailoring.
For the female cabin crew, the uniform features a white jacquard frill blouse with asymmetrically placed buttons inspired from the designer’s Red Label S/S 2005/06 collection and a bold red nipped in waist short jacket with matching skirt inspired from Westwood’s Bettina Jacket from Gold Label’s S/S 1995 and A/W 1995/96 ranges.
The male cabin crew’s uniform includes a sharp Savile Row style traditional British three piece burgundy Oxford wool suit, which is comprised of a grey shadow waistcoat, a white shirt and a red tie, with a contemporary touch.
The female pilot's uniform features a curve enhancing jacket along with tapered leg trousers, while male pilot’s dress is similar to the male cabin crew’s uniform but with wider lapels.
Inspired from the designer’s 1990s’ Gold collections, the female ground crew’s uniform includes a two mirrored panel tunic and jeans as well as a V-neck bust darts infused Salon Blouse accessorised with a colourful scarf.
The men’s clubhouse uniform has taken inspiration from Victorian menswear. The ensemble features a waistcoat, a fake bow tie detail shirt and classic black jeans.
The women’s clubhouse collection is inspired from the medieval era’s pourpoint undergarments, which were usually worn under armours. The uniform includes a waistcoat, a white blouse, a scarf and dark jeans.
The new uniforms will be seen in Virgin Atlantic flights and at airports from September 1, 2014 onwards.

France has launched a system under which apparel may now display a...

The president of Indonesia, Joko Widodo, has inaugurated Indonesia's...

The hazards of fashion industry are well-known, and to curb its...