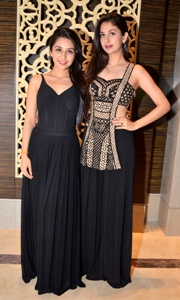 Designer Sonaakshi Raaj with sister and muse Malvika Raaj, was present at the curtain raiser of Lakme Fashion Week Winter Festive 2014, at the Palladium Hotel, Mumbai.
Sonaakshi Raaj is geared up to showcase her latest fusion line ‘Rebel With A Cause’, at Lakme Fashion Week Winter Festive 2014.
‘Rebel With A Cause’ - The newest collection by Sonaakshi Raaj is a dichotomy of opulence and luxury, yet being edgy. The essence of the line is to create glamorous ensembles catering to women's couture wear, with a design philosophy that is distinctly feminine and refined.
Malvika Raaj looked stunning dressed in Sonaakshi Raaj’s creation. She sported a nude and metallic black hand embroidered mesh work backless tunic with palazzos.
The key concept of the collection is the usage of traditional drapes and silhouettes, with a twist for the new age woman, who likes to experiment and is no longer bound by the stereotype. By combining tailoring with drapery, the garments are meticulously crafted to styles that are luxurious yet understated, with strong emphasis on fabric, cut and colour.
Says designer Sonaakshi Raaj, “This season, my line is intricately designed as a toast to the bold, beautiful and independent new age woman, who knows her mind and is not afraid to experiment and create her distinct style statement.”
About Sonaakshi Raaj:
Designer Sonaakshi Raaj is a graduate from SNDT University holding a Degree of B.A. in Apparel Manufacture & Designing.
The Label came into existence in 2009, by winning the University’s Best Collection Award. Thereafter, bagged the 1st position by winning the prestigious “CMAI APEX NATIONAL AWARD” for the “Best Upcoming Designer of the Year."
Sonaakshi Raaj is predominantly recognized as the Sari-Gown specialist and has been rated as the top 25 young designers on Vogue’s radar. She is a pioneer in her field with her highly popularized Sari-Gowns and contemporary Indian wear for the new age women.
Sonaakshi is one of the very few Indian Designers who has been featured for her popular work on the website of Mercedes Benz New York Fashion Week.

Print production technology will continue to evolve, and new...

Kohlâs Corporation, a leading omnichannel retailer in the US, has...