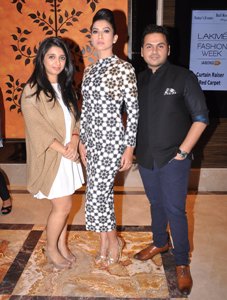 Born out of a passion for Indian craft & heritage and defined by a strong Indian designscape, Sonam & Paras Modi of the Indianwear label ‘SVA’ have been making waves with their Indianwear and Bridal designs. After receiving a tremendously encouraging response to their shows at LFW over the last two seasons and fresh from the launch of  their signature store in Mumbai (at Lower Parel), Sonam & Paras Modi now present yet another breathtaking line up at the the Lakme Fashion Week  Autumn Winter 2014.
This collection titled “Maestro” denotes the vibrancy of life, vigour, valiance and passion. A visual representation of the Spanish Matador, this collection is inspired by the tenacity of one to survive and to conquer, while personifying a flamboyant, arrogant yet humble hero.
At a Preview hosted yesterday, Gauhar Khan played muse to the designer dup and showcased the first look of "Maestro"
In keeping with the philosophy of their inspiration, the designs are delicate yet bold and intense, with stark tones of black, white and gold and a hint of emerald, and wine.
Rich luscious silks, velvets, satins, thick cotton lycra, georgettes pay rich tribute to this monochromatic, dark line.
An important highlight this season would be the customised print created by SVA:
Black and white geometricst, derived from the tiles seen in Spanish monuments. When juxtaposed against traditional pita work technique,zardozi and handcrafted pleats and applique, the resulting silhouette is fiercely regal with a raw, edgy appeal.
SVA meaning ‘soul’ in Sanskrit is the labour of love by Sonam & Paras Modi. "Our conviction is that there is no better canvas than the human form and there is no better masterpiece to take inspiration from than the rich world cultures.. Our passion for heritage reflects in every design and creation", says Sonam Modi.
Sonam’s expertise as a creative designer and Paras Modi’s previous background in International Business and most importantly their willingness to start something together gave birth to SVA.
Sonam and Paras Modi have slowly but surely carved a niche for their label as one that is associated with contemporary design that celebrates crafts-. Their signature Anarkalis, Lehengas, Gowns, Jackets and Saris have a loyal fan following, while SVA Kurtas, Bandhgalas and Sherwanis for men have become quite the “must have” garment in any grooms wardrobe.