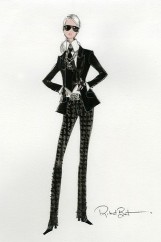 c: WWD/Courtesy Photo
The signature head to toe all black look, sported by Chanel creative helm of German dissent Karl Lagerfeld, is soon going to be immortalized by none other than the world’s most popular fashion doll Barbie.
Mattel, the manufacturer of Barbie, has roped in the 80-year-old design veteran to re-invent a new look for the 29-inches-tall blonde-haired plastic doll as part of the former’s Barbie Collector series.
Slated to be launched during this fall, the limited-edition Barbie Lagerfeld will be clothed in a miniature version of the designer’s iconic black and white ensemble which is comprised of a blazer, a men’s dress shirt with pointed collars, a thick satin tie, a pair of fitted jeans and fingerless gloves.
Before his latest design venture with Barbie, Lagerfeld had earlier dressed the doll in 2009 during the toy company’s 50th anniversary.
Originally introduced on March 9, 1959, Barbie has always been a source of inspiration for fashion designers. Earlier this year, the Beirut-based Lebanese fashion designer Zuhair Murad had dressed the wide-eyed doll in one of his spring-summer 2012 couture pieces, which included a fitted strapless nude silk and tulle made dress featuring black geometric patterned beadwork.
The American made doll’s wide-spread popularity could also be deemed through the Parisian doll museum Musee de la Poupee’s ongoing Barbie-Retro Chic exhibit which features a tiny vintage fashion display on hundreds of Barbie dolls.
Reigning in the international toy market for more than five decades, the making of Barbie doll is believed to be inspired from the famous German doll called Bild Lilli.