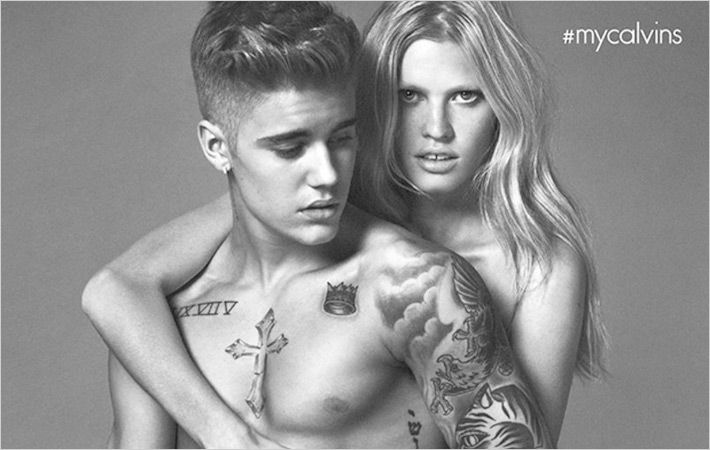 Image credit: Mert Alas and Marcus Piggott
Musician, dancer, actor and singer-songwriter Justin Bieber will feature alongside Dutch supermodel Lara Stone in the Spring 2015 global multimedia advertising campaign of Calvin Klein Jeans and Calvin Klein Underwear.
Shot by fashion photographers Mert Alas and Marcus Piggott in New York City, the brand’s latest campaign features Bieber with Stone in key jeans and underwear styles of the season, furthering the iconic brands’ longstanding legacy of bringing fashion and music together, Calvin Klein, a wholly-owned subsidiary of PVH Corporation, said in a statement.
“Justin joins a long list of musicians, models, celebrities and fashion icons that have been featured in our global advertising campaigns,” said Melisa Goldie, chief marketing officer of Calvin Klein.
“Justin’s global recognition, expressed affinity for the brand, and powerful persona bring a compelling energy to our jeans and underwear brands,” she added.
“Calvin Klein is such an iconic brand and I am excited and honored to become a part of the Calvin Klein brand legacy with this campaign. I have been a longtime fan of the brand and have worn their jeans and underwear for a while, so this is kind of a dream come true,” said Bieber.
Calvin Klein’s connection to music began with one of the brand’s earliest and most iconic campaigns which memorably featured Mark “Marky-Mark” Wahlberg alongside model Kate Moss. Over the years, the house has continued its association with music and pop culture, dressing and supporting a range of musicians around the world.
The Spring 2015 campaign will roll out worldwide in 20 countries spanning digital, outdoor and print advertising, as well as exciting experiential components, timed to coincide with March 2015 magazine issues.
This season will represent Calvin Klein’s most digitally-focused campaign to date with an increased social presence to amplify and create conversation around the campaign, engaging both Calvin Klein’s and Bieber’s fans and followers, according to the company. (RKS)