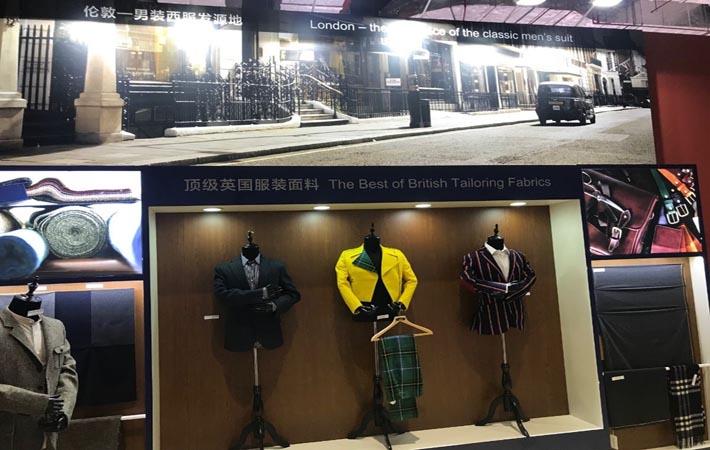 Pic: UKFT
The UK Fashion & Textile Association (UKFT) will be highlighting quality, creativity and craftsmanship at heart of British textile industry at September edition of Intertextile Shanghai Apparel Fabrics to further build on growing demand for UK textiles in China and beyond. UKFT will host a showcase stand in SalonEurope to allow visitors view latest offerings.

Visitors can view a selection of the latest fabrics developed specifically for the Chinese and far eastern markets, find out more about upcoming trends and discover more about UK's unparalleled expertise in textile manufacturing. Some of UK's most exciting print designers, from Fairbairn & Wolf, Owens and Kim and Amanda Kelly through to newer talents including Found Design Studio and Her Studio will also be exhibiting at the show.

Many of UK's historic mills are based in and around Yorkshire, where the area's soft flowing water is used to produce unparalleled quality fabrics. These include Abraham Moon, which was founded in 1837 and prides itself on a reputation for consistent quality and innovative design, and Marling & Evans, which was founded in 1782 as a small, craft weavers specialising in British undyed wools that make the most of the natural hues.

The area is also the manufacturing home of fine English cloth specialist Scabal, which has been weaving luxury cloth at its heritage mill in Huddersfield for more than 75 years. Today, its cloth can be found in tailors' workshops in over 65 countries worldwide.

Taylor & Lodge has occupied its factory in Huddersfield on the edge of the Yorkshire Moors since the company was founded in 1883 and is known around the world for producing some of the finest, luxury British worsted cloths. The firm has a significant international business and became part of the Chinese textile group Shandong Ruyi in 2014.

Further north in England, Linton Tweeds has been producing quality fabrics for couture fashion houses around the world for more than 100 years. All their fabrics are designed and woven at the company's mill in Carlisle, just as when the company was first founded by William Linton in 1912.

With a mill in Peebles on the Scottish borders and head office on London's Savile Row, Holland & Sherry has been supplying prestigious tailors and luxury brands around the world since 1836. Steeped in tradition, Savile Row is synonymous with quality, luxury and bespoke craftsmanship: characteristics that particularly resonate with the Chinese consumer. Bespoke tailors on the famous Mayfair street have clothed icons from Winston Churchill through to Fred Astaire to Elton John.

"Chinese consumers have great respect for British products, appreciating the craftsmanship, quality and history. However, that is not to say they see it as simply traditional: it is traditional but with a twist," said Lindsay Taylor, group sales director at Holland & Sherry. "They are far more adventurous and daring in terms of colour and design than their British or European counterparts and in our part of the market, they really like to invest in quality."

Huddersfield Cloth is launching a new range of suiting fabrics in Shanghai, which have been developed in collaboration with its Chinese agent. "The fabrics are much more adventurous and colourful than we’ve seen in the past," added Ryley.

Her Studio, a new print studio based in East London, is set to make its return to Intertextile after a successful debut in March. Co-founder Helen Stark said that they will be unveiling a collection designed specifically for the Chinese customers, which will include new quirky, whimsical designs.

"We are delighted to showcase the best of what the UK textile mills and designers have to offer the international visitors to Intertextile Shanghai Apparel Fabrics and demonstrate the sheer diversity of the sector. We look forward to welcoming visitors to the show," said Paul Alger MBE, international business director at UKFT. (PC)

The UK Fashion & Textile Association (UKFT) will be highlighting quality, creativity and craftsmanship at heart of British textile industry at September edition of Intertextile Shanghai Apparel Fabrics to further build on growing demand for UK textiles in China and beyond. UKFT will host a showcase stand in SalonEurope to allow visitors view latest offerings
More Fashion News - United Kingdom...