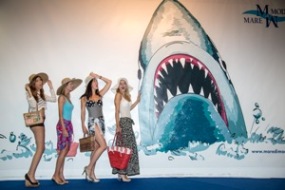 The twelfth edition of Maredimoda, held on November 5-7 at Palais Des Festivals in Cannes, has closed with a 3%-rise in visitors, validating the lively recovery of the European beachwear and underwear compartments.

The highest number of visitors were from Italy, France, Spain and Germany, while the most interesting performances in terms of absolute rise, were from the United States, Russia and Turkey.

The most significant aspect however has been the renewed interest by many fashion houses and big international groups in buying European fabrics; these companies were also offered the opportunity to meet the most famous and reliable clothing manufacturers from the Euro-Mediterranean area, which were attending the fair in a dedicated area and were presenting themselves as a very alternative for the production of middle-high range garments.

“This edition was really above any expectation – points out Marco Borioli, President of Maredimoda – and this is really paying back for both the formula and mission of the fair, which has always supported creativity and “Made in Europe” and fostered a quality production chain that guarantees the highest quality standards for both beachwear and underwear.

Today we are a very worldwide benchmark for beachwear, underwear as well as swimwear: this is the result of work performed over the years, with the clear aim of attaining what the market would have expected from us; this was also a reaction to a mass production of cheap and poor garments which today we cannot stand any longer and which has indeed led many companies to buy from quality manufacturers from all over Europe. In short, the change will start from the market saturation of “low cost” products.

The scheduled fair events did also have great success in attracting guests, especially the Forum on Innovation and the award ceremony of the The Link contest with the following winners:

Marina Dorofeeva of the Marangoni School for beachwear and Nikola Petrovic from “Accademia del Lusso” (Fashion school Academy of Luxury) of Belgrade. The two winners will be “adopted” for on-job training by the two famous ompanies: Parah and Le Bonitas.

Breya is a brand of Indo-Western clothes for women owned by ABP Apparels...