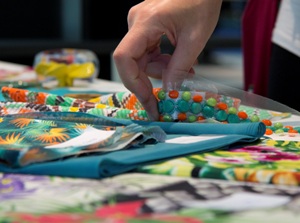 The thirteenth edition of Maredimoda will start on November 11th and close on November 13th; the international trade fair dedicated to lingerie and beachwear textiles and accessories will be held at Palais Des Festivals in Cannes.
The 2016 summer collections by the most qualified European companies will be playing a starring role and will be supported by a delegation of fast-fashion garment makers from the Euro-Mediterranean area, which will offer a fast and high-quality alternative to the wildly growing offshoring:, after years of its vertical growth, many companies are going back to Europe. Indeed, a significant increase of companies going back to buy European textiles is being recorded; then they have their garments made in Eastern Europe or Northern Africa to guarantee higher quality standards and higher product safety.
“Based on their quite negative or at least no longer profitable experiences, more and more medium- and large-sized companies in the beachwear and underwear fields – says Marco Borioli, President of Maredimoda – have decided to go back to buy European textiles and if needed, they are having their garments made in Northern Africa or Eastern Europe.
“Our main objective has always consisted in educating our customers to make a quality, ethical and responsible choice. By now, stores all over the world are full of valueless imported products, made in unthinkable conditions. Today indeed, mass-production has caused a market saturation with any kind of low-cost products whose value we do not even understand”.
“Today success is paying us back – goes on Borioli –, we shall go on protecting, enhancing and promoting the European quality which, more and more, is standing out as an absolute value inside an ordinary and standardized universe.
“Maredimoda shall act as a “quality zipper” between the world of semi-finished products and garment-making and the world of outsourcing; by connecting the two worlds we will offer retailers a top-class supply chain that will represent a quality trademark.”
The next edition of Maredimoda will boast the presence of over hundred exhibitors, same as 2013: they will represent the highest quality standards of “Made in Europe” in terms of creativity, research, quality and reliability.
Trend partner of the next edition of Maredimoda will be the team headed by David Shah, the Anglo-Indian guru who is well-known all over the world for his reliable trend forecasts and who performs his consulting activity for the most important lifestyle and fashion houses: he has already outlined the 2016 summer trend forecasts.
The outcome of this extraordinary research activity has been previewed by the design departments of Maredimoda  companies on May 6th in Como and on May 8th in Barcelona.