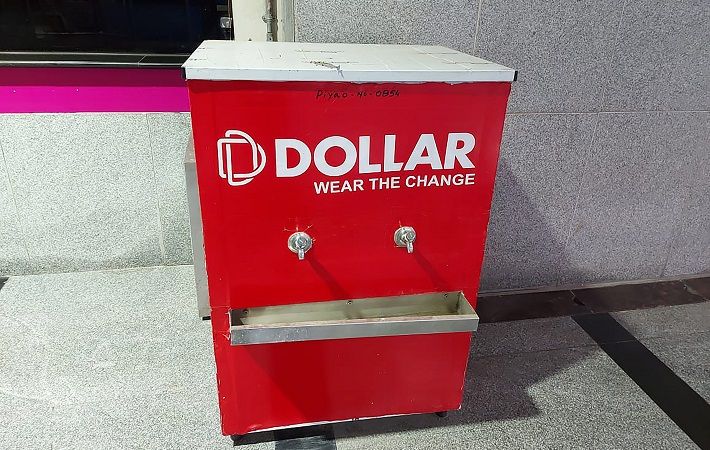 Pic: Dollar Industries
Dollar Foundation, the CSR wing of Indian garment manufacturer Dollar Industries Limited, has joined hands with Metro Rail Authority (DMRA) to contribute and install water kiosks across 22 metro stations. In order to provide hygienic drinking water for all, the initiative is a part of Dollar’s constant efforts to give it back to the society.
Being one of the leading hosiery and apparel brands in the country, Dollar has always been associated with various noble causes and has executed numerous activities that are beneficial for the society.
As a pilot project, Dollar has installed one water kiosk at Sadar Bazar metro station before the lockdown as a trial run and plans to cover at least 100 more metro stations in New Delhi over a span of 8 months. In Phase I, the installation will begin from February 2021 and will be functional from first week of March 2021.
“Dollar Industries Limited has always been a responsible corporate and firmly believes in fulfilling our duties towards the society. Water is one of the driving forces for humanity and the initiative will positively impact the lives of thousands of commuters every day. We plan to cover major metro cities such as Chennai, Jaipur, Nagpur and Lucknow once we are through with the Delhi project,” Vinod Kumar Gupta, managing director at Dollar Industries Limited, said in a press release.
This initiative began from Kolkata wherein Dollar Foundation installed water kiosks across all the major metro stations in Kolkata. Installations of 15 water huts in various areas in Bhubaneshwar were also carried out. Post which, the company installed 16 water huts in Cuttack and 14 water huts have been installed in Puri. The company plans to install 2 more water huts in front of the railway station in Puri in near future.

Dollar Foundation, the CSR wing of Indian garment manufacturer Dollar Industries Limited, has joined hands with Metro Rail Authority (DMRA) to contribute and install water kiosks across 22 metro stations. In order to provide hygienic drinking water for all, the initiative is a part of Dollar's constant efforts to give it back to the society.
More Press Release News - India...