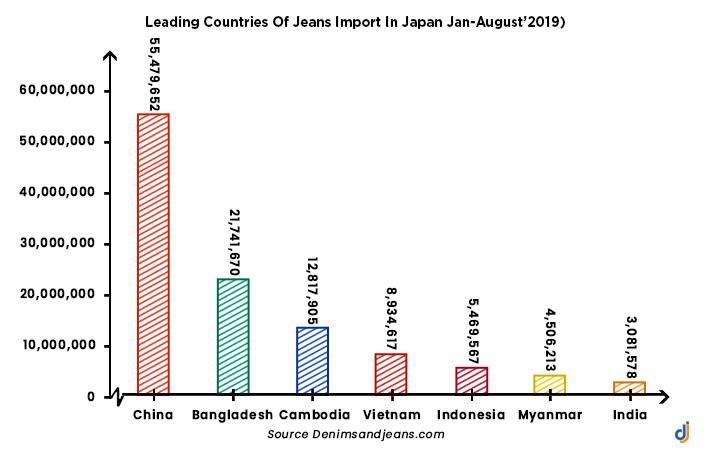 Pic: Denimsandjeans
Denimsandjeans will organise a new Denim B2B Trade from March 4-5 next year at Sunshine City, in Japanese capital city of Tokyo. Focusing on the latest developments which have been introduced in the denim industry recently, the show will have over 40 participants from all around the world. It eyes to attract a large number of reputed retailers and brands.

Japan is one of the most inspiring country when it comes to denim. The way the Japanese have gone deep into adding their own distinct identity to this product in the last 5-6 decades is amazing. This gives the local grown Japanese denim a special flavor and touch. It is also a place where we can see how the traditional means of production have been preserved and perfected over decades.

However, not many people know that Japan is also the third largest importer of jeans globally after the EU and the US, with approximately 175-180 million jeans imported in a year. This is because, though Japan has some good local production, those products are much more expensive, and many retailers and brands import their jeans from overseas.

In the first eight months ending August 2019 Japan clocked a total import of 116 million pieces of denim garments, and the figure is expected to reach up to 174 million pieces by the end of this year.

Japan is also home to amazing denim brands which bring some of the most unique products globally. Brands like Kapital, Momotara, Samurai, Sugarcane and many others have created their own niche globally with their offerings not affected by seasons. There is lot to be learnt from these brands and that is why global designers travel there every year for inspiration.

The strength, breadth and importance of the Japanese market factors motivated Denimsandjeans to launch their new Denim B2B Trade show in Japan, which is due on March 4-5,2020 at Sunshine City, Tokyo.

With a theme #designedinnovation, Denimsandjeans focuses on the latest developments which have been introduced in the denim industry recently. With over 40 participants from all around the world, denimsandjeans eyes to attract a large number of reputed retailers and brands from Japan besides the US, the EU and Southeast Asia.

“Denim is one of the most favourite apparel for the Japanese customers and in spite of high Japanese costs, a decent amount of production still happens there. We all have a lot to learn from Japan and I think a show in Japan will inspire companies to bring out their best to showcase to Japanese customers and also to visitors from around the world,” said Sandeep Agarwal, CEO & Founder, Denimsandjeans.

The entry in the show is through invitation, which can be received by registering on Denimsandjeans Japan website.

Denimsandjeans will organise a new Denim B2B Trade from March 4-5 next year at Sunshine City, in Japanese capital city of Tokyo. Focusing on the latest developments which have been introduced in the denim industry recently, the show will have over 40 participants from all around the world. It eyes to attract a large number of reputed retailers and brands.
More Press Release News - Japan...

The coronavirus outbreak will cause a possible shrinking of China's...

Tough for Vietnamese firms to follow EVFTA rules of origin

Though Vietnamese textile and garment firms are aware of the...