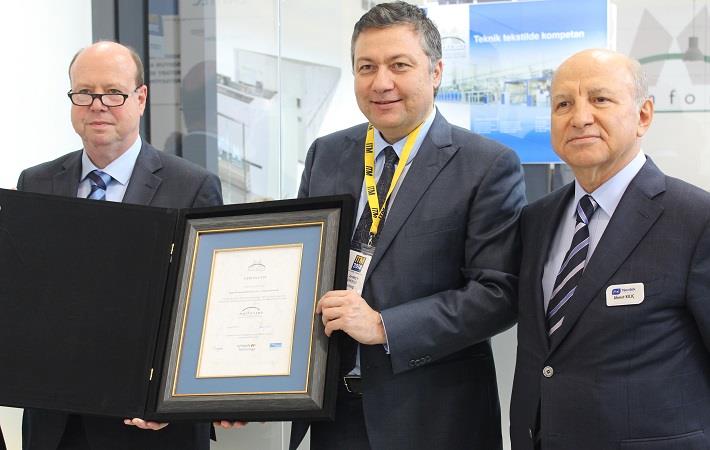 Kipas is also installing a third Monfortex compressive shrinkage system in a combined configuration dedicated to denim production at its Kahramanmaras site in Turkey. This follows the successful installation and commissioning of the second Montex and Monfortex lines at the Kahramanmaras plant in 2018, which Kipas vice chairman of the Board Ahmet Oksuz said had immediately exceeded expectations.

“We performed a very thorough technical investigation based on the latest Industry 4.0 analysis before the purchase, to determine what we needed, and the Monforts technology met all our requirements,” a Monforts press release quoted Oksuz from one of his interviews. “The Monfortex is equipped with a variety of features not found on classical shrinkage machines and the production can be monitored from beginning to end. It also exceeded our expectations in energy cost savings.”

Kipas subsequently received a special certificate from Monforts in recognition of its exceptional utilisation of the technology to its full potential.

The latest Montex stenter now being installed at Kipas is a 12-chamber unit with a working width of 2 metres featuring all of the latest automation features. The Monfortex unit, also with a working width of 2 metres, is in a ‘double rubber’ configuration, comprising two compressive shrinkage units and two felt calenders in line. This allows the heat setting of elastane fibres and the residual shrinkage of the denim to be carried out simultaneously, for a significant increase in production speeds.

“Around 90-95 per cent of denim fabric production now contains elastane fibres and the Monforts system has allowed us to simultaneously increase our production and quality in this respect,” Oksuz said, according to the release.

For the next three years within the New Cotton Project, Kipas will manufacture denim fabrics based on the cellulose-based fibres of Infinited Fiber Company of Finland, made from post-consumer textile waste that has been collected, sorted and regenerated.

The patented technology of Infinited, which is leading the consortium of 12 companies, turns cellulose-rich textile waste into fibres that look and feel like cotton.

“We are very excited and proud to lead this project which is breaking new ground when it comes to making circularity in the textile industry a reality,” said Infinited co-founder and CEO Petri Alava. “The enthusiasm and commitment with which the entire consortium has come together to work towards a cleaner, more sustainable future for fashion is truly inspiring.”

Adidas and H&M will establish take-back programmes to collect the clothing that is produced, to determine the next phase in their lifecycle. Clothing that can no longer be worn will be returned to Infinited, for regeneration into new fibres, further contributing to a circular economy in which textiles never go to waste, but instead are reused, recycled or turned into new garments.

The aim is to prove that circular, sustainable fashion can be achieved today, and to act as an inspiration and stepping stone to further, even bigger circular initiatives by the industry going forward.

The EU has identified the high potential for circularity within the textile industry, while simultaneously highlighting the urgent need for the development of technologies to produce and design sustainable and circular bio-based materials. Making sustainable products commonplace, reducing waste and leading global efforts on circularity are outlined in the European Commission’s Circular Economy Action Plan.

Fashion brands produce nearly twice as many clothes today as they did 20 years ago, and demand is expected to continue growing. At the same time, the equivalent of one garbage truck of textiles is landfilled or burned every second. Most of the textile industry’s environmental problems relate to the raw materials used by the industry – cotton, fossil-based fibres such as polyester, and viscose as the most common man-made cellulosic fibre, are all associated with serious environmental concerns.

Textile Events is one of the largest textile fair in the United Kingdom,...