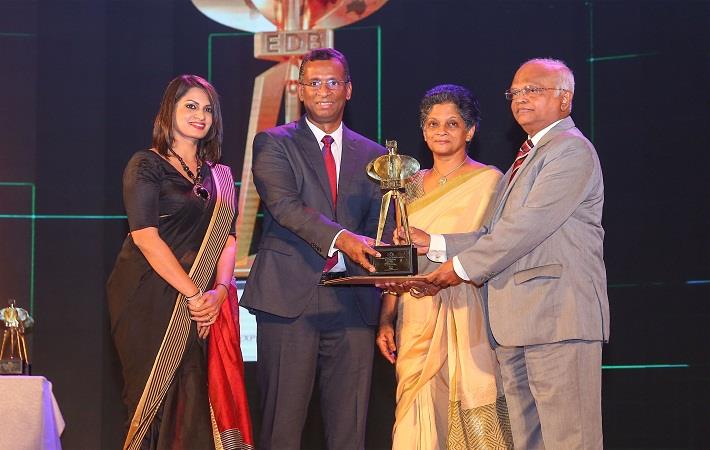 Pic: Teejay Lanka
Teejay Lanka Plc, Sri Lanka's only multinational textile manufacturer, was adjudged the 'Best Textile Exporter' in Sri Lanka at the 2019 Presidential Export Awards presented by the Export Development Board (EDB). The award presented to the company at the 23rd edition of the awards programme, marked Teejay Lanka's debut at this prestigious event.

"We are delighted to win this accolade especially because it comes at a time when the company has been investing significantly in expansion of capacity and upgrading of technology and processes," Teejay Lanka CEO Shrihan Perera said. "We expect these developments to enable us to venture into new export markets in the years ahead, while consolidating our engagements with domestic customers."

The Presidential Export Awards initiated by the EDB in 1981 are the highest recognition of exporters in Sri Lanka for outstanding contributions to the national economy.

With manufacturing operations in Sri Lanka and India, Teejay is one of the region's largest textile manufacturers, and supplies fabric to some of the best international brands across the world. Teejay Lanka Plc is a public quoted company with 39 per cent public ownership. The company is backed by Sri Lanka’s largest apparel exporter, Brandix Lanka which has a 33 per cent stake and Pacific Textiles of Hong Kong which owns 28 per cent of the company.

An ISO 9001:2015, ISO 14001:2015 and OHSAS 18001:2007 compliant company and the first in the industry to develop green fabric, Teejay has been listed on the Colombo Stock Exchange (CSE) since 2011 and was included in the S&P Top 20 Index in Sri Lanka. The company has also been named among the Forbes ‘200 Best under a Billion in Asia’ and been recognised as the ‘International Textile Firm of the Year’ and the ‘International Dyer and Finisher’ by World Textile Institute, London. (PC)

Teejay Lanka Plc, Sri Lanka's only multinational textile manufacturer, was adjudged the 'Best Textile Exporter' in Sri Lanka at the 2019 Presidential Export Awards presented by the Export Development Board (EDB). The award presented to the company at the 23rd edition of the awards programme, marked Teejay Lanka's debut at this prestigious event.

Indonesia has targeted 0.4 per cent growth in the chemical,...

The US bankruptcy court for the Eastern District of Virginia recently ...